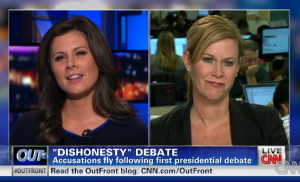 On Thursday night, Erin Burnett challenged Stephanie Cutter, the Obama campaign’s deputy manager, about a claim the campaign has long been making: That Mitt Romney is proposing a $5 trillion tax cut, not specifying how exactly he’d pay for it. Meanwhile, the Romney campaign argues that his plan would not add to the deficit. Repeatedly pressed by Burnett, Cutter maintained the campaign’s stance, noting the “stipulation” but focusing on the Romney’s vague approach.

About the $5 trillion tax cut, Burnett said CNN fact-checked and found that’s not the case. “Mitt Romney has not promised that because he’s going to also be closing loopholes and deductions,” she said, “so his tax cut wouldn’t be anywhere near that size.”

Cutter asked whether Burnett was disputing the size of the cut or how Romney plans to pay for it. He’s campaigned on a 20 percent across-the-board tax cut, she said, adding that it was one of his “main selling points” during the Republican primary race.

Reducing deductions and closing loopholes, however, ensures that number “is not going to be anywhere near $5 trillion,” Burnett insisted.

There aren’t enough deductions to account for the cuts, she argued, therefore Romney will have to raise taxes on the middle class. There are studies that will say otherwise, Burnett countered — eliciting Cutter’s reply to “prove it.”

“Well you can’t prove either side, is what I’m saying,” Burnett responded.

Cutter unsurprisingly disagreed. The Romney campaign is essentially counting on economic growth to pay for the cuts, she argued, which is the same approach President George W. Bush took. “And let’s look at how that turned out.”

Burnett argued that’s not exactly what the campaign is saying. Their plan pairs deductions/loopholes with economic growth.

Nonetheless, “that still leaves you at least $1 trillion short,” Cutter said — pivoting to the Romney campaign’s pattern of shying away from offering specifics about which deductions they would eliminate and which loopholes they would close.

“Last night [during the debate], he walked away from it, said he didn’t have a $5 trillion tax cut,” Cutter said. “He does. That’s what lowering the rates amounts to.”