ESPN Airs Moving Tribute to Anchor Stuart Scott, Who Passed Away at 49
VIDEO

ESPN Airs Moving Tribute to Anchor Stuart Scott, Who Passed Away at 49 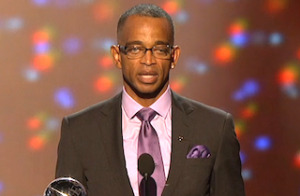 Longtime ESPN anchor Stuart Scott passed away from cancer at the age of 49, ESPN reported Sunday.

Scott, who had been with ESPN for two decades, had an excitable, distinctive style that gave way to numerous now-famous catchphrases, including “boo-yah” and “as cool as the other side of the pillow.”

That enthusiasm became perseverance in his battle against cancer. “When you die, it does not mean that you lose to cancer,” Scott said when accepting the Jimmy V Award for Perseverance at last summer’s ESPY Awards (video below). “You beat cancer by how you live, why you live, and in the manner in which you live.”

Scott was instantly remembered by colleagues, players, and media figures, all of whom testified to his sincere and inspirational presence:

Some things are just so unfair. Rest in peace, Stuart Scott.

Rip @StuartScott. You did it right, @SportsCenter will never be the same. #GoneButNeverForgotten

Thoughts and prayers go out to the Scott and ESPN families. @StuartScott you will always be as cool as the other side of the pillow my man.

He was as cool as the other side of the pillow & will be missed. Prayers up @StuartScott & family
#RIPStuartScott pic.twitter.com/HXuf7qcbMy

Watch Scott accept the Jimmy V Award for Perseverance for his battle against cancer at last summer’s ESPYs below, via ESPN: