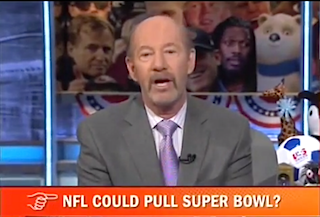 Before Arizona Governor Jan Brewer decided to ultimately veto her state’s SB1062 bill, which would have made it legal for businesses to discriminate against the LGBT community on the basis of religious freedom, ESPN’s Tony Kornheiser used a Nazi analogy to express his views on the potential law.

As Kornheiser explained, the bill was relevant to the world of sports because the NFL had threatened to move the 2015 Super Bowl out of Arizona if the bill was signed into law. “The NFL should leave in a heartbeat if this becomes a law,” he said, “for the very simple reason that the NFL is attempting to welcome Michael Sam into its league.”

RELATED: Bachmann Urges ‘Tolerance’ for Arizonans Who Want to Discriminate Against Gays

“And you are in a state where Michael Sam could not buy a ticket possibly to the Super Bowl,” Kornheiser continued, referring to the potential NLF draft pick who came out as gay earlier this month. “Arizona has become, in recent years, the most recalcitrant, backward-looking state in the country when it comes to social change.”

“How are they supposed to be identified?” Kornheiser asked about gay Arizonans. “Should they wear a yellow star? Because my people went through that at one point.”

“We can refuse you service?” co-host Michael Wilbon chimed in. “Is this Greensboro in 1960? What are we talking about?”

Watch video below, via ESPN: