ESPN Reporter’s Ugly Rant Against Towing Attendant: ‘I Will F*cking Sue This Place!’ 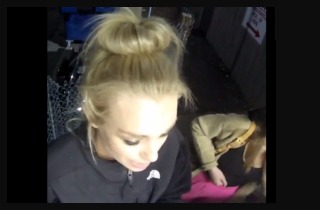 ESPN reporter Britt McHenry has found herself in the negative spotlight after surveillance footage emerged of her ugly rant against a parking attendant.

“I’m in the news, sweetheart, I will fucking sue this place,” the D.C-based sports reporter said to an off-camera attendant. The video, which was posted to LiveLeak on Thursday, continues to show McHenry mocking the unseen woman for her appearance, profession, and intelligence.

“Yep, that’s all you care about, is just taking people’s money,” McHenry said. “With no education, no skillset, just wanted to clarify that. … Do you feel good about your job? So I could be a college dropout and do the same thing? Why, cause I have a brain and you don’t?”

As the clerk’s tone remains unmoved by McHenry’s tirade, the reporter becomes more furious, ultimately jabbing, “Maybe if I was missing some teeth they would hire me, huh? ‘Cause they look so stunning.”

“I’m on television and you’re in a fucking trailer, honey,” McHenry said before leaving. “Lose some weight, baby girl.”

The circumstances surrounding McHenry’s bluster remain unclear, but the New York Post points to a deleted tweet from April 6 indicating frustration over her vehicle being impounded by Arlington, Virginia-based Advanced Towing.

“We are aware of a recent exchange between Britt McHenry and a towing company employee,” ESPN said of the incident. “We are now reviewing the matter with her.”

In an intense and stressful moment, I allowed my emotions to get the best of me and said some insulting and regrettable things. As frustrated as I was, I should always choose to be respectful and take the high road. I am so sorry for my actions and will learn from this mistake.

Watch the rant below, via LiveLeak (WARNING: NSFW — EXPLICIT LANGUAGE):