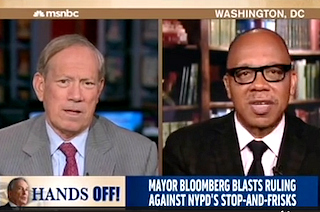 On Morning Joe Tuesday morning, Washington Post columnist Eugene Robinson and former New York Governor George Pataki battled over the effectiveness and equality of the Stop and Frisk policy, which was declared unconstitutional by a federal judge Monday afternoon.

Both men tried to make their take on the law the populist version, with Pataki arguing that the judge’s decision means “some Wall Street lawyer” will have discretion over on-the-street crime decisions, and Robinson countering that stopping and frisking Wall Street lawyers might lead to a higher arrest rate.

“What this judge is saying she’s going to have some Wall Street lawyer, who sits in an office, looking over the shoulder of every single cop walking dangerous beats, day in and day out, at three in the morning or whenever,” Pataki said, “and going to substitute his judgment for their experience, when they have been out there for twenty years, when they understand the nature of what is happening in a community, and can make an intelligent decision as to when to ask someone what they’re up to.”

“There’s certainly merit in Stop and Frisk if it’s done fairly,” Robinson conceded, but added, “88% of the stops and frisks result in no summons, no nothing. You could get a record pretty close to that, maybe it would be 95%, say, if you did it, if you stopped and frisked on the Upper East Side or Wall Street. On Wall Street, you’d probably have more given the criminality that happens down there. Can’t you just expand the geographical areas where you Stop and Frisk, so it’s not a policy that just says, ‘We’re going to go harass young black and Hispanic men,’ which is basically what the judge says you got?”

“97% of violent crimes in this city are committed against minorities,” Pataki said. “You go where the crime is if you want to stop the crime. We don’t have unlimited resources where we can flood the streets of Midtown Manhattan with police officers.”

“It’s easy to not pay attention to the housing projects like they do in Chicago, and let crime go on there,” Pataki said. “It is a tribute to this mayor and Police Department that we are putting so much of our police emphasis in low-income neighborhoods, in high crime neighborhoods, so that the quality of life, the safety that every one of us as an American should be entitled to feel comfortable in, exists not just on Fifth Avenue and Park Avenue, but exists on 125th Street and Ocean Hill-Brownsville.”