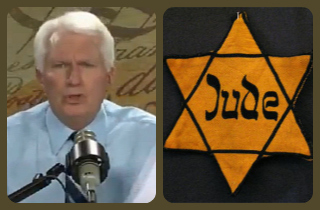 Ever-so-thoughtful evangelical radio host Bryan Fischer took to his airwaves on Thursday to warn his audience that “homofascists” are going to make anti-LGBT Christians wear badges just like the Jews were forced to do during the Holocaust in Nazi Germany.

While discussing the news of several “canceled” conservative speeches — including that of Dr. Ben Carson, who gave up his speaking slot at Johns Hopkins School of Medicine’s commencement due to backlash from his likening homosexuality to bestiality and pedophile during an appearance on Fox News — AFA radio’s Fischer explained that this signals a downward spiral for anti-LGBT religious folk.

“We’re getting to the point where these homofascists are going to force us to wear on our sleeves some kind of identifying marker so people will know who the racists and the homophobes and the bigots are, and can stay away from them,” he predicted.

“If you don’t believe in sodomy-based marriage, if you’re not prepared to endorse and sanction sodomy-based marriage, then you have no place in this institution,” his dystopian prediction continued. “Remember when the Jews in Nazi Germany, they had to wear a yellow Star of David on their sleeve? I mean, we’re getting to the point now, that’s what they’re going to make us do.”

Fischer gave serious thought to what Christians would be “forced” to wear under an impending “homofascist” regime, but came up empty-handed: “I don’t know what the symbol would be, I’d have to think about that.”

The evangelical radio host’s comments come as particularly funny (in a sad way) given his history of cheering on terrible things like a Ugandan law outright criminalizing homosexuality.

Watch below, as clipped by Right Wing Watch: