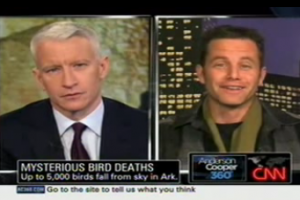 Yesterday we joked that all the dead birds and fish out in Arkansas were clearly signs of the “End of Days.” Someone at CNN wasn’t joking though, so, needing an expert on the Apocalypse (something that’s hard to find considering how rare Apocalypses or “Apocali” are), they naturally invited Kirk Cameron, born again Christian and star of the Left Behind series, onto Anderson Cooper 360 discuss the phenomenon. Some people thought this was kind of weird…including Kirk Cameron.

Cameron quickly tried to put distance between snarky online jokes and hearsay and his faith, starting the conversation out by pointing out that he doesn’t really belong there:

“Well, I first think that they ought to call a veterinarian, not me. You know, I’m not the religious conspiracy theorist go-to guy particularly. But I think it’s really kind of silly to try to equate birds falling out of the sky with some kind of an end-times theory.”

But, hey, if a national news network is going to give you air time, use it, right? So, Cameron stuck around to plug his new movie while viewers at home learned…something…about the dead birds and fish.

Some people are offended that CNN would bring on Cameron to talk about religion when an actual natural phenomenon is happening. I’m not. I’m offended that Will Smith has appeared in two Men in Black movies and has not once has CNN invited him on to share his alien expertise. Yet. What gives?!