‘Everything Is About The Lines Of Racism’: CNN Guest Unloads On ‘Racist’s’ Influence On Justice System
video

‘Everything Is About The Lines Of Racism’: CNN Guest Unloads On ‘Racist’s’ Influence On Justice System 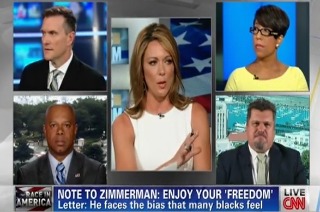 Comedy sketch writers take note: if you can write a better sketch on race relations than the actual conversation this panel of CNN guests had, you should be writing professionally. Laugh along as we dive into one twisted example of what constitutes an “authentic” conversation about race in America on cable news.

Before the substance of this CNN debate began, let’s begin with a moment of levity:

CNN anchor Brooke Baldwin turned during a conversation on racial politics in America to the epidemic of violence in inner-city Chicago. She asked her panel guests why the nation is more focused on rarer incidences of violence like what occurred in Sanford, Florida, and not the violence in America’s cities.

“Diversity and inclusion expert” Buck Davis confessed that he had no real knowledge of the justice system and how officers of the court conduct proceedings during a criminal trial, but still declared that the justice system is deeply flawed.

“What I think the justice system is about is scraping up as much evidence as you can find and creating the most compelling story,” Davis observed. He said that non-legal analysts who observe court proceedings are more likely to project their own personal experiences onto any given trial.

He then added something about “emotion” and “chaos,” inserted “groundswell” somewhere into his observation, and made no sense whatsoever.

That aside complete, Baldwin proceeded to ignore the “diversity expert” and move on to radio host Mo Ivory who circled back to Baldwin’s original question.

“We do care about it,” Ivory said about Chicago violence. “The media doesn’t pick up on it the same way.”

“I hear you,” Baldwin replied, neglecting to defend her profession – and herself – after being attacked for ignoring an issue she had just raised.

“We don’t pay attention to black life the same way we do to white life,” Ivory said, her train of thought fast decoupling from the rails. “This story is all sensational because it was a white Hispanic man.”

“Let’s make that distinction,” Ivory digressed. “We want to brush over that so quickly – that he’s Hispanic so it’s two minorities. He’s a white Hispanic man that we have all identified first as white.”

“Whose fault is that?” Baldwin asked.

“That’s America’s racist’s fault,” Ivory asserted. “Because everything is about the lines of racism in America.”

Tea Party activist David Webb dismissed Ivory’s attack on Zimmerman as a “white Hispanic” as a “media construct” designed to further the narrative that the killing of Trayvon Martin was a racially motivated attack.

The two sparred over the nature of racism in America, leaving the issues they tackled fundamentally unresolved.