Eric Engberg to CNN: Bill O'Reilly Is 'Not a Real Reporter'
video 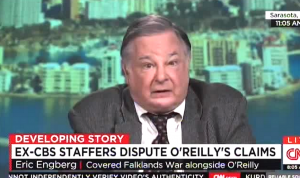 While Bill O’Reilly phoned into Fox’s MediaBuzz to go off on his former CBS colleague Eric Engberg and Mother Jones editor David Corn, the former appeared on CNN’s Reliable Sources to reiterate his allegations.

Engberg revealed to CNN host Brian Stelter that he was motivated to come out and criticize O’Reilly because of an unearthed 2009 video in which the Fox host suggested all his CBS colleagues hid in their hotel rooms during the same supposedly protests the now-Fox host claimed to have seem deadly violence.

“What he said was a fabrication, a lie,” Engberg said, before alleging that contrary to O’Reilly’s claims, then-CBS chief Larry Doyle was unhappy with how O’Reilly had acted while covering the riots in Buenos Aires. He also claimed that the photographer who O’Reilly claimed to have dragged out of the protests was actually “upset” the CBS reporter had exposed him to danger.

And so went much of the rest of the interview: O’Reilly’s claims were presented, and Engberg disputed them. At one point, Stelter frustratedly noted the “he said, she said” nature of this controversy, especially because many of the claims at hand cannot be independently corroborated.