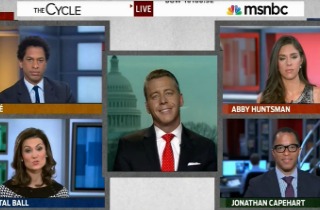 The founder of the conservative gay advocacy group GOPround, Jimmy LaSalvia, joined the hosts of MSNBC’s They Cycle on Thursday where he again renounced his prior affiliation with the Republican Party. LaSalvia told the MSNBC hosts that one of the few places left that accepts anti-gay bigotry is the GOP and this is why the party’s nominees will “never win again.”

“It was during the 2012 election when I realized just how big the problem was,” LaSalvia said. “I saw how Mitt Romney was held hostage and paralyzed with fear of retribution from the forces of intolerance in the party.”

He said that, while the party has broadly become more inclusive, a “small” group of anti-gay and anti-Muslim bigots “are holding the party back.”

“I don’t think that they’re ever going to win a national election again,” he added. “So if I’ve determined that they can’t win the biggest prize, then what’s the point?”

“There is tremendous animosity toward gay people and gay rights in the GOP,” Touré agreed. He played a clip of a 2012 debate in which a gay solider was booed by some of the audience members. “How did it feel to be in a party that didn’t accept you?” he asked.

LaSalvia said he was embarrassed by that moment. “Now I don’t have to be embarrassed, I can just be appalled like the rest of America,” he continued.

“The Republican Party has decided to be wrong on that issue, and tolerate something that most Americans don’t tolerate, and that’s why they won’t win elections anymore,” he concluded.

This post has been updated since its first publication.