Ex-WaPo Reporter Goes Off on Virgin, Accuses Them of ‘Stealing’ Her Friend’s Life
video

Ex-WaPo Reporter Goes Off on Virgin, Accuses Them of ‘Stealing’ Her Friend’s Life 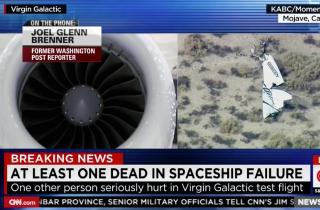 In the wake of SpaceShipTwo’s deadly Friday afternoon crash in the Mojave Desert, former Washington Post reporter Joël Glenn Brenner went on CNN and bluntly accused Virgin Galactic of having “stolen” the life of her friend, the unnamed pilot who perished.

Speaking by phone with CNN’s Richard Quest and Brooke Baldwin, Brenner nearly broke into tears as she described how despite witnessing the successful launch of SpaceShipOne in 2004, she feels as though “the enthusiasm that’s been shown outwardly by Virgin Galactic and by [CEO] Sir Richard [Branson] certainly does not match at all with the technology behind the scenes.”

She suggested the SpaceShipTwo engine was not up to snuff, and so “there is a big gap there and has been for quite some time.” Brenner also noted that she will be documenting the “real problem” at Virgin in the future, before dropping a bomb on her interviewers:

At one point she suggested she knew Virgin would not be happy with her leveling such accusations, but that she had to speak the “truth.”