Excessive Tard-iness: Jon Stewart Shouldn’t Use Disabled People As Punchline Unless He Means It
video

Excessive Tard-iness: Jon Stewart Shouldn’t Use Disabled People As Punchline Unless He Means It 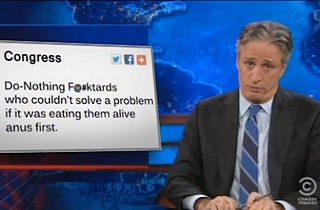 Before you even start, this is not “word-policing,” or “political correctness run amok.” On Monday night’s The Daily Show, host Jon Stewart used the suffix “Tard” to blast the U.S. Congress as “Do-nothing [email protected]#tards” who only get their asses in gear when they, themselves, might be inconvenienced. That suffix, of course, is short for “retard,” and anyone who uses it ought to do so only if they would also approve of the full word.

I’m not just picking on Jon Stewart here, either. The use of the “tard” appendage has become ubiquitous among dozens-doers of every stripe, with popular variations like “libtard,” “Teatard,” and probably to mock Dr. Who fans as “Tardistards.” It’s likely that many of these people would not use the word “retard,” an offensive term for disabled people, in similar contexts, which is why I’m bothering to write this at all. It’s my suspicion that Jon Stewart is among those who would not normally say “retard,” and is probably unaware of the harm that the shortened version carries. Now, he knows.

This is a free country, and as such, every American is free to mock disabled people, and to use whatever words they want. So-called “political correctness” is not “word-policing,” it is simply the act of letting people know how what they are saying makes other people feel, and the ways in which it affects how they are seen. You’re free to call someone a “libtard,” or a “Repubutard,” or even a “retardtard” if you want to, but you should do so with the knowledge that you’re harming people who are nicely asking you not to.

In case you missed it, here’s the clip, from last night’s The Daily Show: