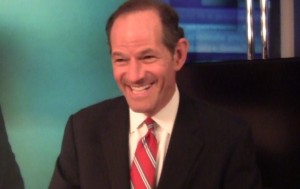 Since the tumultuous departure of Current TV marquee bad boy Keith Olbermann, former New York Governor Eliot Spitzer has been holding down the 8pm timeslot for the network with his show, Viewpoint. In the moments before he took to the studio to co-anchor Current’s coverage of the last night of the Democratic National Convention, Gov. Spitzer sat down to talk about the convention, his show, and the ratings he pays no attention to.

Governor Spitzer has been hiking a rocky trail to redemption since resigning amid scandal, with a stretch at CNN that just couldn’t gain traction, and now, with the herculean task of replacing a fledgling network’s franchise player. The initial ratings were just devastating, but to Current’s credit, and to Spitzer’s, they have patiently waited for the crusading former New York Attorney General to build an identity for his show, and an audience.

That audience has been slow to materialize, but viewership isn’t everything in journalism. Don’t get me wrong, it’s important, far too important these days, and it’s often the enemy of good journalism. However, Governor Spitzer has developed an impressive resistance, if not an immunity, to that pressure by inspiring fierce respect from his colleagues.

I’ve learned this firsthand over the years, as media figures from every medium and strata have leapt to the Governor’s defense whenever I’ve offered a candid opinion, defenses that inevitably point to his intelligence, drive, and grit, both as a public official and a media figure. At Current, he’s treated with uniform reverence, even in unguarded conversation, and with the affection of a family member.

Personally, Governor Spitzer is at once charismatic and remote. At big media functions, he’s a guy who draws a crowd easily, handles the attention comfortably, but doesn’t seek it out. He doesn’t look for an audience, but he usually ends up with one anyway. At Current’s studios Thursday night, Gov. Spitzer wasn’t all that enthusiastic about being interviewed, yet wound up talking for nearly triple the time he could actually afford. Like few other media figures (Wolf Blitzer and Major Garrett come to mind), Gov. Spitzer just seems to love the work he’s doing, displaying no trace of the meta-cynicism that’s endemic to our business.

In addition to the fact that he’s an avid tennis fan, I was surprised to learn that Current TV executives have never once gotten into Gov. Spitzer’s ear about his show’s ratings. That’s the sort of thing you’d expect anyone to say, of course, but Spitzer says it with such absolute conviction that you believe it, even on re-direct. If you find all of his colleagues’ happy talk unconvincing, the fact that Viewpoint has been on the air for five months now (an eternity in TV time) without any pressure to goose ratings is an impressive testament to the respect Spitzer inspires.

We talked about a variety of subjects, but the thematic thread that ran through the interview was that Eliot Spitzer doesn’t want to be on TV just to be on TV, and doesn’t take it for granted. While he seems genuinely unconcerned with fretting over ratings, and genuinely concerned only with offering viewers something of value if he can, the nearly-empty shelves and desk in his office indicate he’s not getting too comfortable just yet: