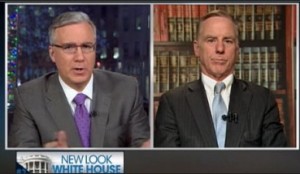 On Wednesday night’s Countdown, host Keith Olbermann made a somewhat cryptic reference to the “Professional Left” flap that put many liberals into meltdown mode. Speaking of Robert Gibbs’ departure with former Governor Howard Dean (D-Vt), Olbermann said that he knew “from conversations at the time” that the kerfuffle was caused by “a combination of not setting ground rules with some reporters, and a lot of misunderstandings and frustrations.”

He wouldn’t go into detail, possibly because those conversations were off the record, so I reached out to the reporter who conducted the “professional left” interview, The Hill‘s Sam Youngman, to see if he knew what Olbermann was talking about. He was unamused.

Here’s the clip from last night’s Countdown, on MSNBC:

Gibbs took a lot of flak for that interview (undeservedly, in my view), but in several White House briefings on the subject, I didn’t recall there ever being any doubt as to the ground rules for the interview. It seems unlikely that such confusion would occur between Gibbs and Youngman. Every journalist, every press secretary, and every PR flack worth a nickel knows that, absent a mutual agreement on attribution, everything that’s said to a journalist is presumed to be on the record. It’s even more unlikely that Gibbs would have failed to mention such a misunderstanding.

I relayed Olbermann’s comments to Sam Youngman, and asked him if he could clarify, or if there was ever any confusion about the ground rules for the interview. Here’s Youngman’s response: (via email)

There absolutely was not. Robert has never disputed we were on the record. Nobody at the White House has. It would be nice if Olbermann would call me before he starts implying that I broke the rules. Of course, that’s just me thinking like an actual journalist.

To be clear, it is entirely possible that someone told Olbermann that Gibbs had meant to make those comments off the record, or later wished he had. I asked Youngman what he thought of that possibility.  Sam responded:

I can’t speak to that. What I know for certain is that neither Robert nor anyone else in the press office has ever even suggested that there was anything improper. In fact, I thought at the time that Robert and his staff handled the whole thing with a lot of class. I think anyone in Washington would attest to my reputation for adhering to the rules. I wonder if Olbermann can say the same thing.

That’s the problem with this sort of offhand revelation. While the intent seems to have been to let Gibbs off the hook to some degree, the effect is to cast doubt on either Youngman’s adherence to basic journalistic principles, or Gibbs’ understanding of them. Since Olbermann failed to divulge the source of the information, or to check it with Youngman and/or Gibbs, the viewer is left to wonder if there’s fire to go along with the smoke.

I reached out to Keith Olbermann for clarification this morning, but he has not responded thus far.

People often wonder what the usefulness of “off the record” sources is, if you’re not allowed to use the information obtained. This type of sourcing is sometimes referred to as “for guidance,” meaning that the source providing the information doesn’t want to be identified, but the information can often be used if it can be verified independent of the source. For example, if I ask the “John Doe” campaign about a remark their candidate made, they might send me a relevant YouTube clip “for guidance.” I can then decide if I want to use the clip, but I can’t divulge that the campaign pointed me to it.

Off the record sourcing can also be useful in helping a reporter to judge whether pursuing a particular angle on a story is worthwhile. For example, if I’m tracking down rumors that candidate “Doe” is a secret drug dealer, a trusted source can tell me “off the record” that I’m on the right track, and I should check Doe’s garbage can for crack vials. I can’t divulge that information, or the source, but I can report what I find in the garbage can.