Exclusive Video: It Takes a Small Person to be Outraged by BP Chair’s ‘Small People’ Remark 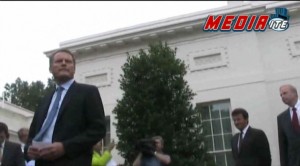 In the aftermath of yesterday’s epic meeting between President Obama and BP executives, the media have been obsessing over BP Chairman Carl-Henric Svanberg‘s “small people” remark. Sure, it was a little comical, but are people really outraged about this? Of all the reasons to be angry at BP, I don’t understand the logic in focusing on the only remotely adorable thing they’ve done.

I was there for Svanberg’s statement, and he came off as a nervous, contrite schoolkid in the principal’s office. The “small people” remark was obviously a quirk of translation, and whether you believe he actually has a handle on the pain being felt by gulf coast residents, he genuinely seemed to be trying.

Here’s the video I shot of the remarks, wherein you can see Svanberg’s body language, and his nervous use of index cards hidden from the network feeds. The “small people” remark drew immediate titters and comments from the assembled press, but again, mostly due to the comical nature of the gaffe.

I was surprised by the tempestuous reaction. On  last night’s Countdown, Keith Olbermann made repeated, outraged reference to the remark, even after someone explained to him that the Swedish translation is not at all derogatory. All over cable news, I’ve seen similar coverage of this, most cloyingly from Anderson Cooper. It’s like slamming Cruella DeVille for using the wrong fork.

Far more rankling was the fact that Svanberg’s companions, especially CEO Tony Hayward, did not speak or take questions. After a miserable 4 hour stakeout, the press, and the people we serve, deserved better.

Outrage aside, I’m also a little bit shocked by the intensity of the mockery. A gentle tweak is understandable, but when did it become OK to deride someone’s skill at English as a second language?