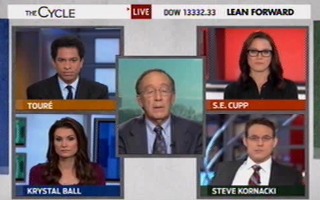 Clinical psychologist Dr. Stanton Samenow appeared on MSNBC’s The Cycle on Tuesday to address the pervasive opinion – expressed frequently in the media and by lawmakers – that violent video games and films are partially responsible for the manifestation of violence in mass murders like Adam Lanza. Samenow flatly dismissed the notion that video games or films are in any way linked to the violent action of disturbed individuals.

RELATED: In Grief, Media Figures On The Left And The Right Flail Impotently At Video Games

Touré asked Samenow about violence in video games and its link to violent episodes by unstable individuals, to which Samenow replied that the mind of a killer is more important to understand than their video game playing habits.

“This casting about for circumstances outside the individual that allegedly propel him to become something that he wasn’t just doesn’t even make common sense,” Samenow replied.

Samenow said that his experience interviewing violent offenders taught him that killers are obsessed with violence, but to say that watching violence made them that ways is a “complete and total stretch.”

S.E. Cupp said that when she thinks of a “culture of violence” she thinks of regimes in Sub-Saharan Africa that impress children into military service, rather than Western artists and entertainment producers.

Samenow agreed. “In our society, nobody is forced to become violent,” Samenow replied. He said that, while disturbed individuals may be inspired by art, millions of people consume the same art and experience it only as entertainment.

Steve Kornacki asked if Americans just had to live with occasional acts of violence as a cost of living in a free society. “Well, unless you want to start imposing censorship on a pretty wide scale, I would say yes,” Samenow replied.