Explosive CNN Panel On The N-Word: ‘There Are Some Things’ White People Can’t Say!

Explosive CNN Panel On The N-Word: 'There Are Some Things' White People Can't Say! 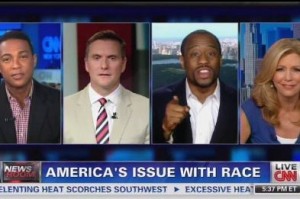 Race has been a big topic of national discussion in the last few weeks, from Paula Deen getting fired for saying the n-word to Rachel Jeantel saying the phrase “creepy-ass cracker.” CNN’s Don Lemon decided an “honest and difficult conversation” was needed, and so that’s just what he did, the end result being a very direct and honest discussion about the taboos surrounding the use of the n-word in popular culture and how it led to the firing of celebrity chef Paula Deen.

Human behavior expert Wendy Walsh provided context to the history of the n-word and how people are punished for merely saying them. She said, “The more they become taboo, they more they keep their power, and we get even more nervous about using them.” Lemon marveled at how the n-word was perfectly acceptable to say on television in the 1970s, but not in the present day. Marc Lamont Hill said it’s perfectly fine to use the word in context, but white people should “absolutely not” use it.

He said, “You just have to accept that there are some things in the world, just, at least one thing, that you can’t do that black people can!” Walsh countered that white teenagers might use it with their black friends because they listen to hip-hop and consider it more a term of endearment, and questioned why white people can’t merely “sing along” to rap lyrics. An exasperated Hill asked, “Why are white people fighting so fiercely for the right to use the n-word? Just let it go!”

Buck Davis explained the important historical difference between the n-word and “cracker,” adding that a lot of people aren’t able to “connect with the pain” black people feel when they hear it. As they went to commercial, Walsh said, “I’m still gonna sing in my car to music I pay for!”

After the break, Walsh explained that when she and her kids sing along, they just replace the n with a w and say “wigger.” She brought up “the c-word” as an example of a word that personally offends her, but argued that “the power to harm is in the ear of the listener.” Davis suggested people rallied behind Paula Deen because they also use the n-word and if she’s a racist then so are they. Hill said he’s not surprised at Deen’s cultural blindness because she’s “exploiting” her brand on the backs of black labor, “treating us like the n-word.”

Lemon argued Deen should not have been fired, it should have been up to the marketplace to decide. Hill claimed it did, but Lemon called him out and said “corporate America decided” to let her go. Hill shot back, “Because they thought it was bad business, Don!” and cited the millions of people on Twitter who criticized Deen. Lemon responded, “People on Twitter hate all the time.”

Watch the full discussion below, courtesy of CNN:

NOTE: Don Lemon will continue the conversation on the use of the N-Word in America, Monday, July 1st at 7pm (Live)
—–