Extra Interviewer Thanks Obama: You ‘Saved My Finances and My Life’ 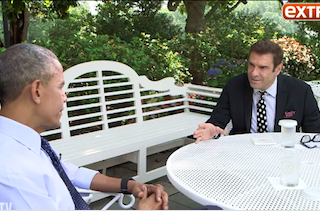 At the top of what has to be one of President Barack Obama’s all-time friendliest interviews, Extra correspondent Jerry Penacoli thanked the president for the Affordable Care Act. Seated in the White House Rose Garden, the interviewer declared, “You pretty much saved my finances and my life.”

Pencil spent years suffering from a variety of ailments that required expensive treatment, including melanoma and thyroid cancer. The lifetime limits on his health insurance meant that he would have had to pay a large portion on the cost out of pocket — until Obamacare passed and outlawed those limits.

“One of the goal for the Affordable Care Act was not just to help people get insurance for people who didn’t have it, it was to give better protections to those who already had insurance,” Obama told Penacoli on Thursday. “You were a perfect example of someone who could be caught with debilitating bills, or, alternatively, not being able to get the care you need.”

RELATED: Obama: I Respond to People Who Write In Just to Call Me an Idiot

Throughout the discussion, Obama continued to use Penacoli’s story as a prime example of why the Affordable Care Act should be kept intact pending this month’s Supreme Court decision. The two men also discussed such hard-hitting topics as what it’s like to raise teenage daughters and who Obama is rooting for in the NHL Stanley Cup (“Blackhawks!”) and NBA finals (“both teams are playing incredible basketball.”).

Watch video below, via Extra: