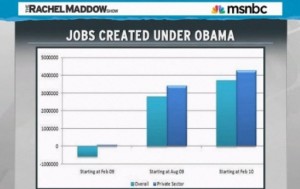 One of the broad narratives of the 2012 election is that President Obama doesn’t have a sufficient economic record to defeat former Massachusetts Governor Mitt Romney, which means he must rely on a “contrast” campaign between their respective “visions” for the country. On Tuesday night’s The Rachel Maddow Show, fill-in host Ezra Klein revealed a new set of goalposts from Mitt Romney that makes the President’s record of job creation much more compelling.

Most of Mitt Romney’s attacks on President Obama’s jobs record have relied on saddling the President with the millions of jobs that were lost in the months immediately following his inauguration, attacks which have been abetted by the Beltway media’s acceptance of the notion that the crater left by the Bush administration should simply wink out of existence when evaluating Obama’s performance. However, Klein points out that in an interview with CNBC’s Larry Kudlow, Mitt Romney offered a different yardstick to measure the next administration’s performance.

“We ought to give whichever president is going to be elected at least six months or a year to get those policies in place,” Romney told Kudlow.

Klein then proceeded to apply Romney’s generous metric (especially generous, given that the next administration will be building on Obama’s progress, not a historic economic catastrophe) to President Obama’s record of job creation, which revealed, “if you give him a six-month grace period, voila, nearly 3 million jobs created since then, and more than 3 million in the private sector.”

He continued, “Take Mr. Romney up on his ‘or a year’ part of ‘six months or a year,’ and the President’s case for re-election looks pretty sturdy. Now it’s more than 4 million private sector jobs created, which is not bad at all, in fact, it’s close to spectacular, fairly rare job growth.”

“In a fact-based world,” Klein concluded, “both presidential campaigns would agree that during the period when President Obama’s policies were in effect, there was significant job growth. Maybe you want it faster or slower, but it was there. And there would be more arguments about what could be done to make those numbers even better, and then the American people would vote on the choice before them. I recommend that you stay tuned for more arguments that the stimulus the didn’t work, that President Obama’s been a job destroyer, and other arguments based — well, let’s be polite and say, not based in the evidentiary facts and standards now agreed upon by both sides.”

The idea that “the stimulus didn’t work” is one of the most durable, and least challenged by the Beltway press, lies of this presidency, and Mitt Romney has been especially guilty of this. In a series of campaign memos this month, Romney touted a “jobs promise gap” that relied on another lie, the notion that President Obama “promised” to keep unemployment below 8%.

In January of 2009, as President-Elect, Barack Obama had Christina Romer and Jared Bernstein do a study projecting the effects of the stimulus. Far from a promise, it was chock full of disclamatory language like this:

“It should be understood that all of the estimates presented in this memo are subject to significant margins of error. There is the obvious uncertainty that comes from modeling a hypothetical package rather than the final legislation passed by the Congress. But, there is the more fundamental uncertainty that comes with any estimate of the effects of a program. Our estimates of economic relationships and rules of thumb are derived from historical experience and so will not apply exactly in any given episode. Furthermore, the uncertainty is surely higher than normal now because the current recession is unusual both in its fundamental causes and its severity.”

What they got wrong was just how badly Bush and the banks had decimated up the economy. The same month they wrote that report, we lost 750,000 jobs, the worst month of the recession, and we lost over 2 million jobs between Jan and March, when the Recovery Act was still lacing up its skates. If you control for these factors, which you must, since the Recovery Act didn’t take full effect for several months, the Recovery Act did exactly what they said it would. For Romney to complain about this is like a guy who reeks of gasoline bitching about how the fire chief is doing his job.

“First, the likely scale of employment loss is extremely large. The U.S. economy has already lost nearly 2.6 million jobs since the business cycle peak in December 2007. In the absence of stimulus, the economy could lose another 3 to 4 million more. Thus, we are working to counter a potential total job loss of at least 5 million. As Figure 1 shows, even with the large prototypical package, the unemployment rate in 2010Q4 is predicted to be approximately 7.0%, which is well below the approximately 8.8% that would result in the absence of a plan. (footnote 1) (footnote 1: Forecasts of the unemployment rate without the recovery plan vary substantially. Some private forecasters anticipate unemployment rates as high as 11% in the absence of action.)”

Of course, the unemployment rate rose more than two full points between then and June, when the stimulus began to take effect. If you control for those 2.2 points, their prediction was off by .2%. If you give the President a year, it was dead-on. Basically, what they’re doing is the same as holding a guy to a damage estimate the day after Hiroshima, but before Nagasaki.

The problem is that, while the President does tout the progress made on the campaign trail, he’s also forced to apologize for the progress not being faster or greater, and currently, has to deal with the slowing of that progress due to Republican obstructionism, among other things. That shouldn’t matter, though, because it should be the job of journalists to place the President’s record in the proper context, and not simply stand by and say “Duhhh, voters will vote how they feel..”

See, that’s only true if you fail to inform them. There are fair criticisms to be made of the Obama presidency, and the evidence suggests his mistake was not doing more of what he did, and passing a larger, more direct stimulus. We would also be in better shape had the President stood firm against Republican hostage-taking that was largely responsible for the 700,000 or so public sector jobs that have been lost, jobs whose paychecks used to support private sector demand. There’s no one who thinks the country would have been better off without the stimulus, or the auto rescue, yet our political media pretend that Romney vs. Obama is some kind of “tomato/tomahto” choice. The press needs to point out that it was Republicans like Mitt Romney who fought tooth and nail to make sure the President couldn’t do more of what clearly worked.