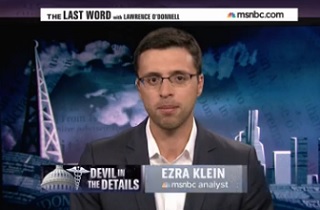 The weeks since the rollout of Obamacare have seen a level of media rodent-fornication worthy of a midnight screening of Willard in a dumpster, but most of that has been die to some rather transparent motives and deficiencies in the mainstream media. Less obvious, though, is the reason behind the egregious rodential sexcapades of Washington Post scribe and MSNBC contributor Ezra Klein, whose appearance on Thursday night’s The Last Word was a veritable clinic in misleading and misinforming on Obamacare.

The segment was pegged to President Obama‘s just-unveiled “fix” to the media firestorm around his “Keep Your Plan” promise, which calls for an administrative adjustment allowing insurance companies to extend cancelled pre-ACA policies for an additional year, but requires insurers to notify those consumers of the other options available to them, and of the benefits and protections that their old plans will not include.

Klein correctly assessed the fix as “not a fix, because the situation actually isn’t that broken,” adding that “What he said today, the new policies coming out, you’re basically dealing with an optional opportunity for insurers to keep putting forward plans that won’t be profitable for them any longer.”

He’s absolutely right about that. What the President offered today was an invitation for Republicans to shut the eff up by giving them a fix that was similar enough to the Upton plan that all they can do now is go back to their repeal corner, and an opportunity for insurance companies to voluntarily bunch themselves in the balls. The plans are already cancelled, and the exchanges are filling up with sick people who can finally get insurance. The President’s “fix” allows them the golden opportunity to take on a near-impossible administrative task that would simultaneously undercut their own Obamacare-compliant products. Let’s see who volunteers to do that.

That’s why it was surprising when, minutes later, Klein opined that “these plan cancellations are related intrinsically to the market being a very, very bad market,”and that “any time you try to ratchet that back, any time you try to keep what is happening now, you’re permitting that kind of discrimination on some level to continue.”

Perhaps the plan being offered by Sen. Mary Landrieu (D-LA) might do that, but it has zero chance of passing. That’s something that a committed wonk like Ezra Klein ought to mention. Landrieu’s plan mandates that insurance companies reinstate cancelled plans in perpetuity, an intrusion that has no constituency. He also just got done saying that the President’s plan won’t change anything. For the same reasons, neither would the Upton bill. What will happen is insurance companies will start marketing their new ACA plans fairly, and stop trying to upsell their customers in their cancellation letters.

That could just be a simple difference of opinion, of course, but Klein then goes on to say that “The problem, ultimately, is that the fundamental machinery of the law, mainly Healthcare.gov and the digital architecture it stands atop, is that it is still not working. It is that fundamental problem where people having their plans being canceled, if they can see, often times that they could get better insurance, they can’t see that now. I think fundamentally the White House is trying to buy time until those people can see that.”

While it’s true that Healthcare.gov is still a long way from being fixed, Klein is wrong to say that people can’t see that they might get better, cheaper insurance on the health care exchanges. That hasn’t been true for several weeks, and in case he’s just forgotten to check, President Obama pointed that out earlier today. Consumers can compare plans, and even get an estimate of their eligibility for subsidies. Hell, even reporters can do that, and have been able to do that for weeks.

Klein took heavy criticism from liberals over his early coverage of the Obamacare rollout, focusing on things like the hold music on the ACA phone line, and while the overall “adults in the room” tone gets grating, Wonkblog has also put out lots of great, clarifying information. Things like this, or referring to insurance commissioners doing exactly what the President wants as “backlash,” smack of burnishing an independent veneer, at the expense of the truth. There are enough rats on the other side already.