Fact-Wreck: CNN Subjects Democratic Convention To ‘Reality Check’ Based On A Lie 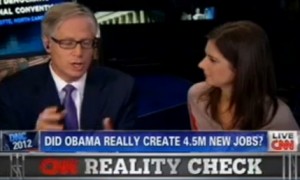 If you’re looking for a better study in contrasts between CNN’s coverage of the Republican National Convention and the just-beginning Democratic National Convention, look no further than Out Front host Erin Burnett. In the moments following GOP running mate Paul Ryan‘s speech last week, Burnett dismissed the litany of falsehoods that she herself noted, and called his speech “Precise, clear, and passionate.”

On Tuesday night, faced with Democrats who passed fact-checking with flying colors, Burnett and Tom Foreman invented a “Reality Check” based on a lie of their own.

Convention anchor Anderson Cooper tossed to Burnett with an innocent-sounding “Let’s go to Erin Burnett and Tom Forman for a reality check.”

“A lot of things were said this evening, making fact checkers everywhere very busy,” Foreman began. “But there was one cornerstone claim of the Democrats tonight, they pounded it like a nail, that President Obama has created more than 4 million jobs since taking office.”

He then played several clips of Democrats touting the improvement in jobs numbers over the last 29 months. “So it’s clear,” Foreman said, “the claim is the President created 4.5 million new jobs since taking office.”

Well, no, that’s not what any of the speakers said in that clips package. They all quoted jobs created within the last 29 months, not “since taking office,” so Foreman and Burnett are basing their “Reality Check” on a lie that they made up.

“The problem here is not in the math,” Foreman continued. “More than 4 million jobs have been created.”

Great, so the story is that Democrats told the truth! Good news, for a change.

“What is missing here is context,” Foreman continued, and Burnett chimed in “Yes, and context is everything.”

(Needle-scratch sound effect!!!) Hold the phone. Last week, Paul Ryan delivered a speech so chock-full of falsehoods that Erin Burnett was having trouble jotting ’em all down, yet her reaction to that speech was that it was “Precise, clear, and passionate.”

But now, the Democrats grab Burnett’s and Foreman’s attention by “pounding like a nail” the fact that “our economy has gone from losing 800,000 jobs a month to adding 4.5 million private sector jobs in the last 29 months,” a claim which she admits is 100% true, and their reaction is that we need to take a blowtorch to it?

It’s unfair, and a clear double-standard, but if Erin Burnett woke up and decided to do her job yesterday, and truly place the President’s record into some sort of fair context, even that wouldn’t have been so bad. Let’s hear the context.

Hold the phone, Erin. First of all, you’re not adding context. In the clips you played, the speakers make clear they’re talking about job growth over the past 29 months, and every Democrat is crystal clear about the slide into oblivion that President Obama inherited. The Democrats’ 100% accurate jobs claims are being made 100% in context.

But worse than that, it is rank dishonesty to quote that 5 million jobs lot figure, and just let it hang there. That figure includes almost a million jobs (818,000) that were lost in January of 2009, when Barack Obama didn’t even take office until Jan. 20. No fair evaluation of the President’s record would include those job losses, and indeed, Mitt Romney himself has said that it takes “at least six months or a year” for a new president to get his policies in place.

Even if you think Romney’s standard is too loose, Burnett should have, at a bare minimum, noted that the economy lost 1.5 million jobs before the Recovery Act was even signed into law, and almost four million jobs before any of it had a chance to take effect. That’s context. The viewers can decide, for themselves, how to evaluate that context, but to conceal it is willfully dishonest.

Then, Burnett nails the Democrats with another “crucial” bit of “context.”

So, Rahm Emanuel included the proper context? Then why is your face still making noise?

Because if you include government jobs, it makes President Obama’s jobs record appear worse, even though private sector employment is the figure every news organization uses every month (despite people like me trying to get them to notice that Republican-led cuts to public sector jobs have crippled demand, and the recovery. Public sector jobs were fairly stable until the Republicans gained a 41st vote in the Senate, at which point they could block any additional aid to states for cops, firefighters, and teachers.)

There are ways to spin the President’s jobs record more positively (as Mitt Romney inadvertently has), but Erin Burnett and Tom Foreman have no duty to do that. In fact, they has a duty not to do that. However, they have an equal duty not to spin it unfairly, especially in the guise of “context” that wasn’t omitted in the first place.

It would be one thing if CNN suddenly decided to take the criticism it received last week to heart, and do a fair, thorough, real-time fact check on the Democrats. It would still be annoying that they let the Republicans slide, but at least they’d be making an honest effort to correct themselves going forward.

That’s not what happened here, though. Burnett and Foreman admit that the claim they chose to highlight is 100% accurate, but nonetheless, needed a “reality check” of “context” that was, in reality, a reading of the President’s jobs record that even a Romney campaign flack wouldn’t have the balls to make.