Factor Panel: Is ‘Liberal Hero’ Bradley Manning’s Solitary Confinement For His Own Good? 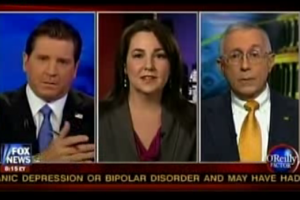 The conditions under which suspected Wikileaks source Bradley Manning is being held have elicited responses ranging from simple acceptance to cries of torture, most debating whether Manning is being hurt by his solitary confinement. Today’s O’Reilly Factor panel (led by Eric Bolling) decided instead to question the alternative: how would a general prison population accept the accused Wikileaker?

Bolling discussed the matter with criminal defense attorney Nicole DeBorde and former U.S. Deputy Undersecretary of Defense Jed Babbin, the former expressing concerns that Manning may be treated more severely than deserved given the fact he has yet to be convicted of anything, and the latter’s concerns siding more on the behavior of his supporters and those of Wikileaks. Calling the matter a “political stunt,” Babbin noted that the idea of turning Manning into a left-wing martyr must be appealing to those who support his cause, later calling in “a conflation… of all the thing the liberals want: he’s gay, he’s a whistleblower, he’s trying to expose supposed war crimes in Iraq– this is a dream guy.”

Bolling led the conversation away from Manning’s public image and expressed his own outrage at the fact that, should Manning be found guilty of what he is accused, much of the concern is for his safety and not the safety of those his actions compromised. But while on the subject of safety, Bolling brought up the point that, perhaps, “keeping him in solitary confinement [was] for his own safety.” There is no real way of telling how a general population would react, he continued to argue. On this all parties agreed, Babbin commenting that “if this guy is who we think he is, he may be in danger from other sources” and DeBorde noting  that “he should not get any special treatment” but that his safety should be considered. That said, DeBorde noted that “as I understand it, we haven’t heard anything… that the administration believes” Manning would be hurt. Ultimately, she concluded, “everything our justice system does should be able to withstand the scrutiny of the light of day”– another statement to which all parties agreed.

While the panel was not by any means overly warm towards Manning, the angle which they take on his solitary confinement– that it could be for his own good– is certainly a new one, and the reaction from his supporters to this possibility is sure to be fascinating.