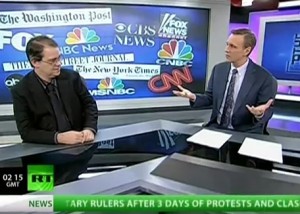 This past weekend, as with any normal weekend, the frontrunner for the Republican presidential nomination said several stupid things that deserved mockery and outrage. In this case, former House Speaker Newt Gingrich told a Harvard crowd, on Friday, that the solution to income inequality involves replacing adult janitors in poor neighborhoods with nine year-olds. On Saturday, he told Occupy protesters to take a bath. Guess which quote the media picked up and ran with?

Lest you think I’m exaggerating, take a look at the full context of what Gingrich said. The summation above is actually kind. Gingrich explicitly, sweepingly denounced child labor laws as “stupid,” and singled out nine to fourteen year old children in “poor neighborhoods” to replace “union janitors.”

If the sickening classism and child exploitation isn’t enough for you, contemplate, for a moment, Newt’s word choice for who would oversee these poor child janitors: a “master janitor.”

Since Saturday, all I’ve been hearing about is Newt’s “take a bath” quote, which is definitely stupid in its own retro-douchebag way, and is admittedly “Keep on Truckin'”catchy, but next to a call for the decimation of hundred year-old protections against the exploitation of children, it hardly seems worthy. I was shocked that, all day Monday, most of the colleagues I spoke to, at the White House and elsewhere, had not even heard about the child labor comments, but all of them were talking about “take a bath.”

Last night, I appeared on The Big Picture with Thom Hartmann to discuss the issue, and honestly, spent most of the segment trying my best not to start cursing at such a stark demonstration of the media’s screwed-up priorities. When I got back to my hotel room, I was heartened to see that both Ed Schultz and Rachel Maddow addressed Newt’s “let them eat urinal cake” plan for impoverished children on their respective shows, and with far more eloquence than I’ve been able to muster. “Maybe it’s just me,” I thought, “maybe I’m missing all the shows that are playing this clip.”

Apparently, though, it’s not just me. I searched the TV Eyes transcript database this morning, and mentions of the “take a bath” quote outpaced the child labor remarks by almost a ten to one margin, 335 to 35, including Rachel and Ed.

The one heartening part of this whole thing is that, aside from some mostly anonymous internet and Twitter commenters, I haven’t really heard any conservatives defending Newt’s remarks. If Mitt Romney is smart, he’ll be putting this clip in an upcoming attack ad. How’s that for “family values?”

Most of the idiotic defenses that I have heard have involved comparisons to things that aren’t illegal, like paper routes. That’s the whole point: child labor laws are there to allow reasonable opportunities for minors to earn some walking around money, but to prevent them from being exploited, and to prevent such work from interfering with their education. The people of this country decide, through their elected representatives, what is reasonable. It is the fruits of this process that Gingrich finds “stupid.”

Children in this country don’t have a lot of rights. They’re essentially the property of their parents or legal guardians. A person unfamiliar with poverty, or exploitation, or children might think that being a janitor would be a nice “choice” for a nine year-old to have, but the fulcrum of almost all laws designed to protect children is the notion that children, to varying degrees, aren’t capable of giving informed consent for adult activities. By targeting poor families, Newt’s plan exploits their economic vulnerability as well.

Telling the protesters to take a bath was dickish, but I’m sure each and every one of those Occupy protesters would agree that they can stick up for themselves. The media ought to be sticking up for children, instead.

Here’s the clip of my appearance on The Big Picture, from RT America: