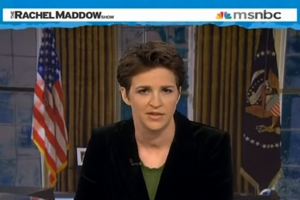 As has been repeated extensively in the past 30 hours or so, President Obama’s first Oval Office Address was not quite received with open arms. Some were left unsatisfied; others wondering what the president could have possibly done differently to make things better. But it’s safe to say few actually did anything about it. Rachel Maddow, on the other hand, went ahead and gave the speech she wanted to hear herself, fake Oval Office background and all.

Maddow’s concern with the speech was that it didn’t go far enough to plan a way to prevent a similar tragedy in the Gulf of Mexico– or anywhere, really– in the future, and was not fiery enough to make up for it. President Maddow’s speech used much stronger language, expanding President Obama’s moratorium on offshore drilling indefinitely until safety technology was advanced significantly and promising that “the age of oil is over.” “Never again,” she hypothetically promised, “will any company, anyone, be allowed to drill in a location where they are incapable of dealing with the potential consequences of that drilling.”

In her idealized version of the speech, the president would promise a daily update on the situation in the Gulf of Mexico until life was mostly restored to its condition before Deepwater Horizon exploded, and, even more important than the clean up effort underway was the assurance that alternative energy sources would finally replace oil:

“The world is different now. Our country is different now. The scales have fallen from our eyes. People say we are not ready– they’re right; we’re not ready. We also weren’t ready to fight in WWII before Pearl Harbor happened… I no longer say that we must get off oil. We will get off oil, and here’s how. The United States Senate will pass an energy bill this year. The Senate version of the bill will not expand offshore drilling. The earlier targets in that bill for energy efficiency and for renewable energy sources will be doubled or tripled.”

To do this, she continued, she would get the Senate to override filibusters and, in an extreme case, use as many executive orders as possible to get them through. As a response to complaints that President Obama’s speech didn’t go far enough to promise a path away from oil dependency– something, as has been pointed out repeatedly, that no president has been able to achieve– she made the passing of this bill key to the Obama presidency. Maddow did not elaborate, however, on whether there was a plan B in case those deadlines were not met and, without offshore drilling, America was met with an energy definiciency, though buying foreign sources of energy seems to be the only alternative in that case.

Video of the alternative universe Obama speech below: