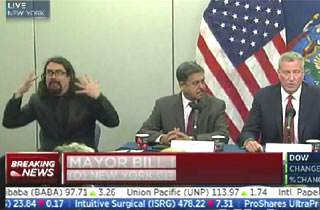 He’s dramatic. His face takes on a spectrum of expressions. His hands jab forcefully, to convey the gravity of the situation. He has long hair and looks like he’s begging to be spoofed on SNL.
Watch below via NBC:

And the internet loves him, wondering whether he’s Penn Jilette or fat Dave Grohl:

This sign language guy at the NYC ebola press conference is just captivating. Such a dramatic signer.

Anyone else watching the NYC press conference on Ebola? Dave Grohl is nailing that sign language! #DaveGrohl #NYC #EbolaInNYC

Of course, there are some truthers who wondered if the man was making up stuff (though their suspicion is not without precedent):

Watching @BilldeBlasio #Ebola news conference at repair shop. Most here are convinced his sign language interpreter is faking it.

Quite helpfully, this high school teacher has a video teaching people how to say “Ebola” and “quarantine” in ASL :