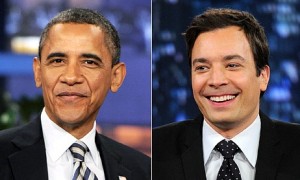 NBC viewers still have to wait a few hours to catch President Obama‘s hotly-anticipated (and hotly–debated) appearance on Late Night with Jimmy Fallon, but the pool reporters who traveled with the President to the University of North Carolina Campus got to see the festivities in real-time. According to their report, the President preceded his interview with host Jimmy Fallon by “Slow Jamming” the news.

For those of you not blessed with a travel pool assignment, be sure to check back here later tonight, when we’ll have highlights of the President’s appearance.

Taping of Late Night with Jimmy Fallon began at 2:17 p.m. at Memorial Hall on the campus of UNC-Chapel Hill. Fallon called it the “holy crap edition,” citing the president’s appearance.

Noting that he had been on campus for two days to prepare, Fallon said, “I’ve been having the best time hanging out with the Secret Service.”

He said Obama promised not to pander to UNC students, although he thought it was strange when the president changed his campaign slogan from “Yes we can” to “Duke sucks.”

During a musical number, the students in the audience were on their feet, clapping and cheering.

After Fallon said he wanted to “slow-jam the news,” Obama came out from behind a curtain at 2:28 p.m., to wild cheers from the crowd.

“I’m president Barack Obama, and I, too, want to slow-jam the news,” the president said.

Mr. Obama then held a microphone and described the importance of keeping student loan interest rates low, while the band behind him played a moody, bluesy background music. Fallon came in with his own alternating riffs about Stafford loans.

Background singer serenaded Obama as “the POTUS with the most-est.”

When he came out to be interviewed, the president commented on the “Tar-Heel blue chairs” on the set.

Asked about watching sports on TV and basketball, POTUS said, “You gotta go with the Bulls.”

“I don’t get a chance to watch a lot of TV,” he said. “I’ll date myself when people ask me what kind of comedies I like, I’ll say ‘Groundhog Day.”

Audio in our room wasn’t great, at times it was hard to hear the interview clearly.

Asked about embarrassing moments of the presidency, he said “the worst thing at an official event” was when they were hosting human-rights activists who were receiving the Robert Kennedy award at the White House. He said he gave his speech and grabbed Michelle’s hand and began to walk out of the event, only to be told by a staffer that he was supposed to remain there.

“We had to turn around and walk back,” the president said.

Asked about his college experience, the president was describing it when Fallon displayed a black-and-white photo of Obama as a college-age student.

“Notice the afro,” the president said to laughs.

Obama then did a reiteration of his UNC speech, talking about the importance of college education and the need to avoid falling into “massive debt.” Talked about the issue pending before Congress.

“We didn’t finish paying off all of our student loans until about eight years ago, and I’m president of the United States,” he said of himself and the first lady.

What followed was a mostly serious discussion of student loans and clean energy investments.