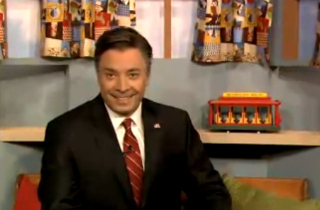 On Tuesday evening’s episode of NBC’s Late Night, host Jimmy Fallon turned Mitt Romney‘s pledge to cut federal funding for PBS on its head with a spoof of the classic children’s show Mister Rogers’ Neighborhood. Fallon subbed out the eponymous host for his Romney impersonation, and made fun of several different aspects of the GOP candidate’s personality and politics.

Fallon’s “Mister Romney” gets his shoes shined by Manuel and lectures the youth audience about a wallet and its wonderful contents. After telling the kids that they must be poor if they are watching public television, Mister Romney says that “money is sort of like paper that you can use to buy things you want, like toys or yachts.” Where does money come from? “A magical place called our parents.”

Before heading over to the Neighborhood of Make-Believe (“Where me and Paul Ryan get most of our facts from”), Mister Romney ties a stuffed dog to the top of the trolley using a piece of string he previously had trouble envisioning as anything else during an imagination exercise.

In the magical puppet-based neighborhood from our collective childhood, Mister Romney acts as a wet blanket, revealing the scene to be entirely fake. “There’s no such thing as a talking feline in the real world,” he says before turning around the fake tree to reveal a union puppeteer.

Mister Romney’s final piece of advice for the kids: “There’s only one person in the world that’s like you. And that’s you. And people can like you exactly the way you are. But if they don’t, then just pretend to be the exact opposite of what you are, and then maybe they’ll like you.”