Family Guy Does Entire Episode On The Tea Party, Depicts Them As Violent Fools 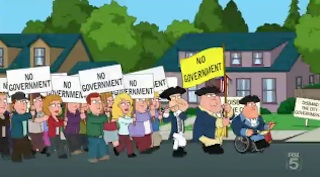 The production schedules on most animated series (South Park not included) are incredibly long. How long? Well, a week ago, Saturday Night Live did a sketch about Occupy Wall Street that already felt uncomfortably dated meanwhile, this week, Family Guy got around to doing a whole episode on the Tea Party. Remember those guys? They wore silly hats and mattered for about an election and a half? Yeah, well, they finally got their due last night on that bastion of liberal propaganda that is Fox…Entertainment.

The episode, entitled “Tea Peter,” featured the show’s main character joining the local Tea Party after the government shuts down the unlicensed mall he was running out of his house after affixing a “Come in, we’re open” sign to his front door. It, uh, made a little more sense in context.

Peter is warned by the show’s voice of reason, Brian the dog, that the Tea Party is merely a ruse run by rich businessmen who want to use populist anger to rid the country of regulations. Sure enough, when Peter gets there, his rich father-in-law is running the entire thing by wearing a mullet wig and pretending to be a guy named “Joe Workingman.” The Tea Party ends up demolishing the government, anarchy rules in the streets, and Peter learns the valuable lesson that rich people aren’t actually looking out for any of us.