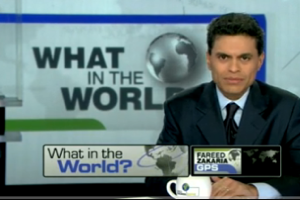 Fareed Zakaria, who occasionally throws fairly well-disguised bombs from his perches at CNN and Time in a manner so serene many fail to notice– is taking on his cable news stylistic opposite, Glenn Beck— or at the very least, his math skills. In his trademark soothing tones, Zakaria gave Beck a math lesson on those 10%, or 157 million, “Muslim terrorists” Beck claimed were plotting to attack America— namely, that that figure is “1000% wrong.”

Zakaria opens up his segment, aptly titled “What in the world?,” by simply following through on the 10% math to figure out just how many people 10% of the international Muslim community would be. Zakaria’s lesson even included a virtual chalkboard, just to make sure Beck got the message, one must assume. He correctly points out would be somewhere in the neighborhood of 157,000,000 Muslim terrorists, and notes Beck’s laments of “why, oh why wasn’t this receiving any media coverage?”

Zakaria’s answer? “Well, let me suggest one reason: it is total nonsense– a figure made up by Glenn Beck with absolutely no basis in fact.” He also uses U.S. State Department figures to negate Beck’s, which claim there were 11,000 total terrorist attacks around the world in 2009, including every act of terror in Iraq and Afghanistan, and testimony from terror expert Peter Bergen, who emailed Zakaria to tell him Beck’s figures were “1000% wrong.”

It doesn’t get much better for Beck during Zakaria’s semi-out of character deconstructing of his argument. Team Beck, meanwhile, has already put together a comprehensive retort to Zakaria, with data showing, among other things, that support for Osama Bin Laden “ranges from 4% in Azerbaijan to 56% in the Palestinian territories.”

The whole thing via CNN below: