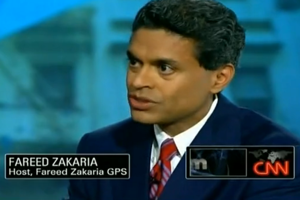 The ongoing, understandably low-temperature feud between CNN and Newsweek‘s Fareed Zakaria and the Anti-Defamation League continued on Anderson Cooper 360º last night, where Anderson Cooper asked Zakaria to flesh out the beliefs that brought him to return a 2005 award to the ADL in defense of the proposed Islamic cultural center in lower Manhattan. It comes down to First Amendment rights, he explained.

Zakaria first outlined once again the reason he believes that the people behind the cultural center are worth trusting. “The US has been searching for moderate Muslims, particularly moderate Muslim clergymen,” and Imam Feisal Abdul Rauf fits the bill. While Zakaria refused to defend his political statements– “they’re not my political views”– he did categorize them as “generic left-wing critiques of foreign policy.” But, more importantly, regarding his interpretation of Islam, “time and time again he has come out squarely on the moderate or liberal camp.”

Retelling the story of the return of his Hubert Humphrey Award for First Amendment Freedoms, he explained that he had thought about writing an article in support of the community center, and while doing so noticed his award in his office. “I thought there was something so hypocritical about an organization that was giving an award for the defense of the First Amendment,” he explained, “which is an amendment that says Congress shall not establish a religion in this country or favor any religion.”

And for the same reasons he supports the building of the mosque, Zakaria added that he was in favor of advertisements running on Manhattan buses against the community center depicting photos of the September 11 attacks: “freedom of expression is freedom of expression.” No word on what he thinks of “Suspicious Packages.”

The interview from AC360º below: