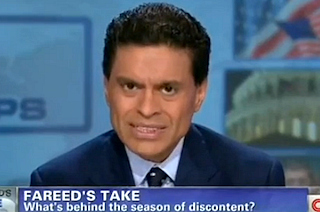 CNN’s Fareed Zakaria attempted to put the Arab Spring and recent Egyptian violence into global and historical perspective on Sunday afternoon, noting that Arab democracies were in a phase of “illiberal democracy,” similar to one undergone by the west two centuries ago, a sort of caterpillar-state of democracy before foundational systems of checks and balances arise.

Zakaria began by pointing out that the U.S. is hardly the paragon of fully democratic institutions. “The distinctive feature of the American system is now how democratic it is, but how unequal it is,” Zakaria said, noting that the unelected Supreme Court has final say over laws, the Senate is deliberately anti-representative, and so on. But he also contrasted America’s stable, time-tested government with the tumults that have rocked France ever since the French Revolution. America may not be a perfect democracy, but it is an enduring one.

Zakaria then made parallels between the U.S.’s evolution of democracy and the Arab Spring.

“In so many of these cases, what we are watching are democratic governments, elected freely and fairly, that are abusing individual rights, ignoring minority parties, and eroding checks and balances,” Zakaria said. “Observing the early flowering of this phenomenon in the mid-1990s, I described it as ‘illiberal democracy,’ and this is the problem we confront in the Arab world and in so many other developing countries.”

“The good news is that other elements within society are fighting against this kind of illiberal democracy,” he continued. “Political groups. Student movements. Even the clash between the Egyptian military and the Muslim Brotherhood could be useful in the long run, because it resembles the clashes between kings and lords, the church and the state, the aristocracy and the new business elites, in the development of western democracy.”

“It can look very messy while it’s happening,” Zakaria concluded, “and neither side has a monopoly of virtue, but the contest between power centers, over time, does help to create a system of checks and balances.”