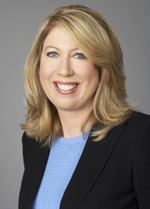 Liza McGuirk takes over – and that may give an indication of just how un-Crossfire-like the show will end up.

The news was first reported by New York Magazine’s Gabriel Sherman. “McGuirk’s hiring affirms that Klein wants the Spitzer-Parker show to feature highbrow discussion, perhaps to avoid criticism that he’s putting a shoutfest like Crossfire back on the air,” he writes.

In the CNN release, McGuirk describes Spitzer and Parker as interested in “exploring the world of intelligent ideas” and bringing an “elevated discussion to prime time.”

Elevated discussion and intelligent ideas – a definitive departure from the way CNN views it’s prime time competition. But with the differentiation long solidified, it’s time for ratings, and a radically different approach may be needed to jumpstart the struggling line-up.

Liza McGuirk has been named Executive Producer of CNN’s new 8 pm program with co-hosts Eliot Spitzer and Kathleen Parker set to launch this fall. The announcement was made by senior vice president of programming Bart Feder and is effective immediately.

“Liza has the experience producing quality television that is smart and informative, and she has the editorial muscle to develop a program that will be provocative and entertaining,” said Feder.

Most recently, McGuirk has been the executive producer of CNN’s Sunday morning news and discussion program Fareed Zakaria: GPS. Launching that program in June 2008, she has produced a one-of-a-kind public affairs program on cable news. Nominated for an Emmy after just months on the air, the Zakaria program led by McGuirk has provided intelligent and insightful programming about domestic and international issues.

Said McGuirk, “After working with Fareed Zakaria, I’m delighted to be working with two people, Eliot and Kathleen, who are truly his equals at exploring the world of intelligent ideas. Most of all, I look forward to bringing that kind of elevated discussion to primetime.”

Before rejoining CNN in 2008, McGuirk spent 25 years working in television journalism and has extensive experience in all areas of television reporting and production. An Emmy-award winning producer, McGuirk was at CBS News for eight years, including four years producing and writing segments for 60 Minutes correspondent Ed Bradley. McGuirk also worked at CNN from 1980 to 1989, where she wrote and produced daily newscasts, supervised story coverage and produced a number of special events, among them, political conventions and presidential trips overseas. She was the fifth person hired when CNN was in its infancy. Before returning to CNN in 2008, she was a freelance documentary producer, teaming up with Christiane Amanpour on several projects.