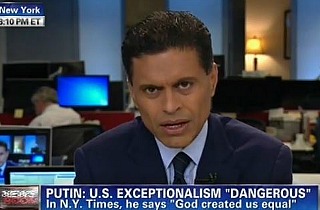 CNN host Fareed Zakaria told anchor Brooke Baldwin on Thursday that he was thoroughly impressed by Russian President Vladimir Putin’s op-ed in the New York Times where he warned Americans that it was dangerous for them to consider their country exceptional. Zakaria said the Times piece was “intelligent” and “well-written,” and that Putin was a “skilled wordsmith.”

“Why do you think he wrote it?” Baldwin asked Zakaria. “And why the tone of the piece?”

“Well, Vladimir Putin has always wanted to set himself up as a kind of — in opposition to the idea that the United States is the only super power in the world,” Zakaria replied. “He has always resisted that idea. He’s always tried to in some way present an alternative to other countries.”

“He regards the destruction of the Soviet Union, in his words, as the greatest catastrophe of the 20th century,” the CNN host continued. “A certain amount of this is a kind of nostalgia for a world where the United States was not as dominant as it is.”

“It was also very intelligent, a well-written piece,” Zakaria opined. “I was struck by how cleverly crafted it was, and it ended by saying the United States should not think of itself as exceptional, that’s dangerous.”

“It was very, you know, whoever wrote it, and I suspect it was not Vladimir Putin, is actually a very skilled wordsmith,” Zakaria concluded.