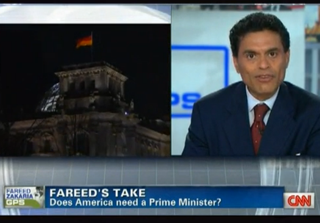 Fareed Zakaria is getting sick and tired of all this partisanship in American politics, but unlike many political commentators, he has refused to blame one side or another. Instead, on his program this morning, Zakaria claimed the system was broken– not that it was too bureaucratic and cumbersome, but that having separation of powers in our government has made it so difficult to pass legislation that it may have directly caused the S&P credit downgrade.

For someone who got so riled up over the Tea Party’s “counter-constitutional” attitude, Zakaria really doesn’t seem to like the Constitution. Zakaria noted that after the credit downgrade, “only countries with parliamentary systems” have AAA ratings (except for France, which is a presidential/parliamentary hybrid). That “brought to mind my years in political science graduate school,” where he learned that parliamentary systems were superior because “the executive governs the legislature.”

Citing Juan Linz‘s “The Perils of Presidentialism,” an essay that argued that parliamentary systems are less stable but more efficient because “there is no contest for national legitimacy and power,” Zakaria agrees with the thesis of that paper, suggesting that the American regime is antiquated in its functions. “Think of David Cameron in England,” Zakaria noted, arguing that the UK Parliament was far more likely to not “squabble” or “hold the country hostage” in a way that would hurt the economy.

The problem with America, Zakaria continued, was that both the Presidency and the legislature “claim to speak for the people,” one because of their most recent electoral victory and the other because of their election to the top of the executive ladder. He gave the presidential system some praise– arguing that America avoided the 20th century turn to “quasi-socialist economic plan that set the [UK] in a bad, bad path,” but “in a fast paced world where they are acting quickly and with foresight,” America seemed to be working too slowly for Zakaria.

It’s hard to figure out where to begin with this argument, but as Zakaria’s biggest complaint seems to be against the Tea Party, it’s worth looking at what the Tea Party would be capable of in a parliamentary system. In said systems, because the legislature appoints the executive leader, elections are held in the name of parties, not people. Voters elect one of (typically) any number of parties, which allowed greater access to individuals who do not have the influence of bigger parties behind them. In September 2010, right before the midterm elections, Gallup reports 58% of Americans would have wanted to see a third party form a viable coalition (62% of Tea Partiers did the same).

In a parliamentary system, this would not have been an issue, as the candidates’ name wouldn’t even be on a ballot– meaning, people could choose to elect the “Tea Party” on their ballot instead of a Republican or Democratic nominee. This would have meant people voting for what they liked– say, the rhetoric of then-candidates Rand Paul and Marco Rubio, or perennial non-candidate Sarah Palin— without any regard for the actual person running in their district. Needless to say, the Tea Party would be far more powerful in a parliamentary system than a presidential one, perhaps powerful enough to have led the country to a default. Sure, the default may have not left us with an AA+ rating, but that we would have secured a AAA and not AA or lower after a default feels far less likely the more the Tea Party could sway the legislature. European parliamentary systems have to deal with this nightmare situation on a regular basis– take the influence of Basque separatist group Bildu in Spain or various Northern Irish separatist groups in the UK.

But the aforementioned is merely academic political science conjecture– based on facts and studies but providing little insight into why Zakaria’s opposition to the presidential system rings particularly hollow. As mentioned before, part of his much-ballyhooed gripes with the Tea Party was precisely because it had gained too much power, and used that power for “counter-constitutional” purposes. It doesn’t get more “counter-constitutional” than arguing the Constitution’s division of federal powers is ruining the nation.