Fareed Zakaria: ‘Liberals Need To Grow Up’ And Realize The Limits Of Obama’s Rhetoric 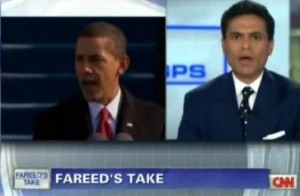 On his GPS program Sunday morning, Fareed Zakaria told viewers that he thinks “liberals need to grow up” and realize that President Obama’s oratorical gifts have their limits. The declaration has earned him sharp rebuke among liberals, but also from conservative sites like Newsbusters, each of whom see Zakaria’s premise at odds with reality.

Newsbusters’ Noel Sheppard points out that there has been plenty of air and ink devoted to the idea that the S&P downgrade is the fault of the Tea Party and the Republicans, which is true, then chides Zakaria for complaining about liberals doing what people like Zakaria have trained them to do:

Maybe this “recurring liberal fantasy” was fostered by folks like Zakaria that presented Barack Obama to the American people as a messiah. If the public has a Hollywood-like view of this president, it’s because the media put him on a pedestal like nobody before him.

It’s true that liberals have been too hard on President Obama at times, but not out of some magical belief in his powers. Many were disappointed that health care reform didn’t include a public option, or that the President didn’t pass a larger, less tax cut-heavy stimulus package, when he had control of both houses of Congress. A lot of us blamed weak “conservadems” for undercutting stronger measures, but as President of the United States, Barack Obama should have been able to heel those blue dogs.

There was also a lot of impatience with the President on the repeal of Don’t Ask, Don’t Tell, but history has shown that his handling of that issue was pitch-perfect.

Now that the House has gone Lipton, and the Senate is no longer filibuster-proof, there’s a tendency in this town for people to be like the Oliver Platt character in 2012, whose every utterance is a way too-harsh reality. “What, you thought we weren’t going to eat live, skinned puppies? Grow up!”

But a divided government is not the end of the world as we know it, and liberals have a right to be disappointed in President Obama’s performance in the debt ceiling “negotiation.” It wasn’t his silver tongue that we expected to save the day, but rather, the overwhelming public support for his position, and the near-universal agreement that the threat of a default was unacceptable. Instead, they got the Bad Haggler-in-Chief. From Crooks and Liars:

No, liberals aren’t upset that he doesn’t make more heartwarming speeches. Liberals are upset that Obama’s tactics to negotiate in the conditions Zakaria describes is to start out giving the other side more than 50% of what they want and move further to the right from there. But that’s a much harder position to defend, so Chait and Zakaria create a strawman to make liberals look unreasonable. Further, there is no indication–as Zakaria asserts–that Americans are concerned with jobs AND deficit spending. Americans care about their jobs and the economy vis a vis whether they’ll have a job in the foreseeable future.

There is another strain of Obama worship that pervades some in the political classes, a confidence in his political skills that imbues them with a sense that he’s got something up his sleeve, and we just don’t know what it is yet. Such confidence is not without basis, as this President has performed more rope-a-dopes than a narcoleptic Rock ’em Sock ’em Robot.

Barring some kind of major twist, though, the current calculation seems to be that Republican intransigence will turn the tide of independent voters in Obama’s direction. If the “SuperCongress” spits out a deal that resembles the balanced approach that Americans want, and that they wanted President Obama to fight for, this debt ceiling fight could work out in his favor. Unfortunately, the threat of across-the-board cuts that would cripple the government is, to Tea Partiers, like the threat of ice cream to a toddler.

The Tea Party, and the Republicans, will rightly take heat for having put a gun to the head of the US economy, but liberal angst at the President has to do with the fact that he negotiated a resolution that allowed them to shoot each hostage in the leg.