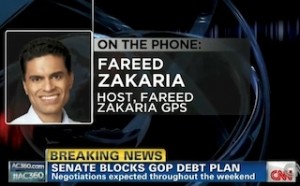 Fareed Zakaria is quickly building a reputation for sharing frank and candid opinions on political factions with whom he holds in particularly low esteem. Take for example last night’s conversation he had with AC360 host Anderson Cooper regarding House GOP members sympathetic to the Tea Party movement, who Zakaria feels were doing no less than taking the nation hostage over an inflexibility on raising the federal debt ceiling.

Zakaria was reiterating comments he had made over the weekend in which he cited conservative Fox News analyst Charles Krauthammer who had noted the “counter-constitutional” behavior of the Tea Party, or in other words, these elected officials were “not acting in the way that constitutional democracy expects you to act.”

While some opinion media types have made hay over rhetoric from the left that have compared the Tea Party to “terrorists,” Zakaria’s larger point in likening them to hostage takes is that the threat to potentially have federal government to default on its debts seems to many to be an irrational negotiating technique, like a hostage taker who threatens to kill his captive if he doesn’t get what he needs. The language will be viewed as irresponsible hyperbole by some, but just as many, if not more, will see it as refreshing and honest assessment of an ugly chapter in the nation’s political history.

Anderson Cooper: Fareed, you say the Tea Party is anti-democratic at this point. And you talked about the polarization that is occurring. How do you mean that they’re anti-democratic?

Fareed Zakaria: Well, Anderson, if you think about what’s going on, the Tea Party is trying to pass a particular agenda, which is basically this all-cuts budget. It cannot get it through the Congress of the United States. It cannot get it through the political democratic process that we have, which is that Congress passes something and the president must sign it. That’s the normal workings of democracy.

Now, that is why even Charles Krauthammer, columnist for The Washington Post, fire-breathing conservative urged today in his column in The Washington Post not to go down this path because he called it “counterconstitutional.” In other words, they are not acting in the way that constitutional democracy expects you to act. You are meant to respect the democratic process. You try your best to convince to get a majority in the House, a majority in the Senate and the president to sign it.

But if you control just one of those three branches of government, you can’t hijack the entire system and say I’m going to blow the country up unless you listen to me.

They have only won one election to one house once.

Fareed Zakaria: Well, unfortunately, as I say, I think they don’t understand the workings of democracy. They have not been elected as dictators of the United States. They have been elected to one house in one branch of the American government. The only way you can translate your wishes into public policy in America is if you can convince your branch and the other one, the Senate and the White House, to go along with it.

If you can’t, you’ve got to figure out amongst yourself what you can agree on. This is why it is fundamentally anti-democratic –”counterconstitutional” in the words of Charles Krauthammer – to be trying to do this. It’s just an extraordinary act of hostage-taking on the part of the Tea Party. It is holding the country hostage.

And it has already damaged the good standing of the United States. It’s very important to understand that Tea Party talks a lot about morality. In a capitalist framework, the obligation you owe in terms of repaying your debts is a moral obligation. When the Visa bill comes you can decide that stuff you bought is stuff that you don’t want. You pay the bill.

Then you can have an interesting conversation about how to reform your spending. But you can’t renege on your debts.

Anderson Cooper: What do you think is going to happen now?

Fareed Zakaria: It seems very difficult to see how the kind of people you were talking to, Anderson, are going to accept some kind of compromise. Iit seems to me you have to accept that 300 million people in this country, not all of them agree with you. And so you make your best case, you take as much as you can.

They had a deal. John Boehner provided a deal with $3 trillion of spending cuts for $1 trillion in revenue enhancements – all of it through closing tax loopholes, none of it through raising rates.

Now, if that’s not acceptable, I really don’t know where you go. And my sense is, I hope that President Obama is seriously exploring the possibility of invoking the 14th Amendment.

Fareed Zakaria: He has the legal authority to simply raise the debt ceiling himself. I think that President Bill Clinton thinks that it is a viable argument. I’m not a constitutional lawyer. But I think we have reached a level of dysfunction here that this is the kind of national emergency almost like a war.

And if the president were to invoke that and if it were to go to the Supreme Court, I have a feeling the court would as it does with War Powers issues and say, ‘This is a political issue. We’re not going to get involved.’ And the president’s writ would stand.

Anderson Cooper: And, Fareed, to the Republicans who say, well, look this August 2nd is not really going to be the cataclysm that people talk about?

Is this how the greatest economy in the world should be run that we should be saying, ‘We’ll take the first 20 cents out of every dollar and pay the debt, but we won’t pay the veterans and we won’t – and if you listen to what the congressman said to you, Anderson, he said, ‘I don’t want any tax increases. No closing of loopholes. I want to pay the interest on the debt. I want to look after our seniors. That’s Medicare, Social Security. And then I want to look after the army.’

Well, you know, I’ve got news for you, Congressman. There ain’t much money left. If you aren’t willing to cut any of those things and not willing to raise tax revenues then you’re going to have to rely on magic to somehow balance the budget.

That’s all the big money. That’s where it is. It’s not in some mythical waste fraud abuse. The bulk of the money is in Social Security, Medicare, the military, interest on the debt.

You can abolish the space shuttle program and the Department of Education and that’s going to get you four days’ worth of money.