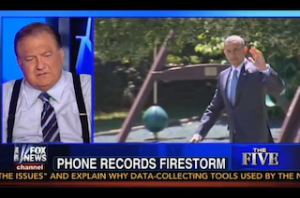 There was a bit of a role reversal on Fox News’ The Five Thursday afternoon with liberal host Bob Beckel tearing into the Obama administration for allowing the NSA to obtain phone records from millions of American Verizon customers and the more conservative hosts defending the agency’s right to do everything it can to protect the country from terrorism. Beckel exploded with rage over the breach of privacy, accusing the government of sliding into “fascism.”

“I think it is one of the most outrageous examples of the stepping on the Constitution I’ve heard,” Beckel began. “They have no right to the phone records… It is illegal, it is unconstitutional and it is deplorable. I didn’t like it when they did it during the Bush administration and I don’t like when they’re doing it now.”

“They have taken this PATRIOT Act, which I think was the most dangerous act passed, and they have taken it and abused it,” Beck added. “You talk about fascism? You’re getting damn close to it.”

But at the same time, Eric Bolling, who no one would accuse of being an apologist for President Obama, had trouble condemning the administration this time. “This is tough one,” he said. Echoing the sentiments of Sen. Lindsey Graham (R-SC), Bolling explained, “Personally, and I’ve said this before, I don’t do anything wrong so I don’t really care if you snoop on me. I’m worried about the bad guys.” He acknowledged that “government overreach” is also a concern and recognized that “a lot of people are going to be upset” by his comments.

When Beckel called on the NSA to come before Congress and prove that terrorists acts have been stopped by the “intrusion on millions of Americans,” Dana Perino pointed out that Sen. Mike Rogers (R-MI) did claim today that the program has thwarted a terrorist attack. “I trust that the government is doing the right thing on this,” she said.

“If there was a terrorist attack and it killed your son,” Perino proposed to Beckel, “and you found out that the government hadn’t done everything it could to try to find out the intel to prevent that,” he would feel differently.

“It would be terrible for my son, certainly,” Beckel said, standing firmly on principle, “but do I think that the government has the right to intrude on our personal lives? No.”