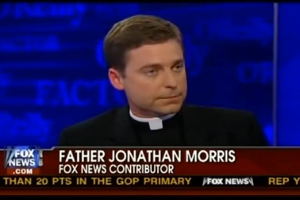 Father Jonathan Morris, Fox News’ resident spiritual adviser, was on The O’Reilly Factor last night to discuss comments by Los Angeles Cardinal Roger Mahony against the new Arizona immigration law. In the process, by opposing the law while supporting racial profiling, he might have proven why Roman Catholic priests don’t make the best political commentators.

The premise of the segment, hosted by Juan Williams, was already ridiculous enough– “What would Jesus do about illegal immigration?”– though Williams asked a legitimate question about the Church’s stance on immigration: wouldn’t the Church prefer amnesty for illegal immigrants since most of them are Catholics? The response he got from the Father was more than a bit confusing.

Father Morris’ initial response to Cardinal Mahony’s comments seemed consistent: just because someone crosses into the country illegal and commits an immoral act does not give the government free reign on what to do to them. Then he seems to lose track of his words and argue in favor of the law, agreeing that he wants to see illegals removed from the country, but wait! “This law is idiotic. It’s crazy, because it’s not going to fix the situation.” Morris doesn’t specify how it won’t, but clarifies that it’s definitely not because of the one thing opponents of the bill are protesting against: “I’m not totally against profiling, against police using profiling methods to get criminals.”

Listening to an intelligent person flounder so desperately to sound informed about a topic so far from his expertise is more than a little painful, but if you want to watch Father Morris’ ideological roller coaster anyway, the segment is below: