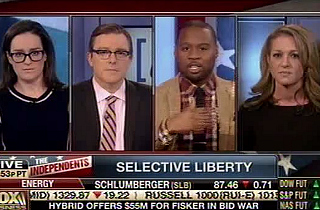 Meet Washington Times opinions editor Emily Miller. She really believes in the individual right to own a gun, but not to put marijuana in your body. No, sir. She detests the individual liberty to use marijuana so much that she took to the pages of her paper to write a little diatribe on it.

We’d have fisked Miller’s asinine little screed here at Mediaite, but is it really worth the effort to take on someone who already displays a fundamental lack of understanding on how our criminal justice system works and/or how the drug war affects lives besides just telling people “NO REEFER MADNESS FOR YOU”?

Probably not. And besides, the column already received sufficient send-ups over at The Stag Blog and Wonkette.

Continuing their streak as the cable news show to watch, FBN’s The Independents had on Miller last night to call her out for the rank hypocrisy of believing in the individual’s liberty to own firearms but not the liberty to possess a bag of marijuana.

The segment got a little too shout-y when Miller suggested marijuana has no medical benefits. “Neither does radiation,” co-host Kmele Foster cleverly pointed out in response (referring to chemotherapy), while a visibly upset host Kennedy rattled off the various ways the drug has been used to alleviate the symptoms of serious diseases and their treatments.

RELATED: The Weekly Standard Is Absolutely Wrong About Drug Legalization

The segment never got around to discussing over-criminalization, the militarization of police, and the fact that the government’s own studies have found marijuana less addictive than alcohol and nicotine. (Oh, and not a single person died from a marijuana overdose.)

But we can predict how the discussion would’ve gone anyway: Miller wouldn’t have been concerned about any of that.

Towards the end of the segment, Foster confronted Miller with a basic question. “How much is it worth to prevent people from toking up on their own? Is it worth $20 billion per year to stop people toking on their own?” he asked. “Is it worth turning thousands and thousands of people into criminals who otherwise would not be?”

“I don’t know what your question means,” Miller responded, while lamenting that “there is so much money to be made in this industry.” Okay, so? Guns are a huge business too, and they can be dangerous.

But, more importantly, with that question Foster got to the fatal flaw in Miller’s ever-so-flawless logic: She doesn’t understand that the war on drugs has costs; that using the arm of government to punish people for something you find icky has costs, both monetary and in people’s lives; that she likely rails against wasteful government spending in other sectors, but somehow fails to identify that a drug war is costly and harmful.

Oh, and then Miller’s views were exposed as even more shallow during this exchange on her “selective liberty”:

KENNEDY: As someone who respects freedom across the board, who truly respects the Constitution, I think you have to fight for the things you don’t necessarily engage in or necessarily agree with when it comes to basic freedoms in this country.

MILLER: And where is drugs anywhere in the Constitution?

FOSTER: It doesn’t have to be in there!

KENNEDY: Where’s alcohol? Where’s cheese? Where’s lack of sleep? Where’s shopping too much? Where are any of those things?

Miller then lamented how she was in a 3-on-1 battle with libertarians on the issue. Sadly, that’s not true: Co-host and Reason magazine EIC Matt Welch didn’t get in a single word.

Watch the segment below, via FBN: