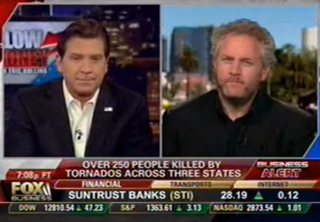 Andrew Breitbart takes his media blitzes seriously. While the newly-minted author was taking on Bill Maher‘s panel last night on HBO, he was also simultaneously on FBN’s Follow the Money, lambasting Democrats for “using [Hurricane] Katrina as a cudgel against President Bush” while not criticizing President Obama for his take on other disasters. Surprisingly, he took nearly as much heat on Fox Business as he did on HBO.

Breitbart’s take down of Obama was prompted by questions from host Eric Bolling on whether the President adequately addressed the devastating on Alabama after hundreds of people were killed by tornadoes. Breitbart found that “less than two hours” in Alabama was nowhere near enough, and he attributed the short time to Alabama being a red state that is “not treated seriously by the mainstream media.” Nor would it be, he continued, by a “blue state president for blue state people” who “knows that he can’t win them over so what’s the point of investing any amount of time or effort?”

At least one guest, Bernard Whitman, took grave offense to Breitbart’s comments, calling them “canned talking points” and an “outrageous jaded example of taking someone’s tragedy and trying to manipulate it for their own political advantage.” Bolling gingerly attempted to remind him that Breitbart was still on the air with them, but that did little to stop Whitman’s rage. Breitbart, on his end, didn’t see the problem. “I am using the left and the media’s standard against George W. Bush,” he wryly responded, and later directed back to the original issue, Obama’s Alabama visit, by Bolling, who wondered why he couldn’t spare the time it takes for a round of golf (four hours) to tour Alabama. Whitman, on his end, found an ally in fellow panelist David Webb, who, while giving President Bush the benefit of the doubt in noting that the federal government can’t enter a disaster area without being called in, countered Breitbart’s claims by arguing “this tit-for-tat about bad behavior or bad decision followed by another one is a BS argument.”

The lively debate via Fox Business below: