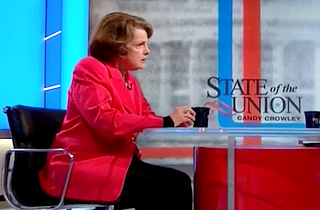 Senator Dianne Feinstein (D-CA) appeared on State of the Union Sunday morning and told host Candy Crowley that Karl Rove’s comments about presumed presidential candidate Hillary Clinton’s cognitive functions were “pathetic,” but also noted that a Clinton presidency would place someone with “real background in foreign policy” in the White House.

“The Karl Rove effort was pathetic,” Feinstein said. When Crowley asked if the underlying point about Clinton’s health was legitimate, Feinstein replied, “That she has sustained brain damage? That’s legitimate?…In my view, she’s in the prime of her political life. She has all of the elements of a good leader, plus the fact — and this is not to be underestimated — she is enormously attractive to people. She carries the torch for women, who are the majority of votes in this country, very strongly and holds it very high. I think people respond to her.”

“I think the book will likely carry a good bit of her thinking on various big issues, certainly foreign policy, certainly the Secretary of State, and we would have someone in the White House who would have a real background in foreign policy,” Feinstein said. “I think that’s critical at this point in the world with Russia expanding, with Africa becoming real problems from a terror point of view, and on and on and on.”