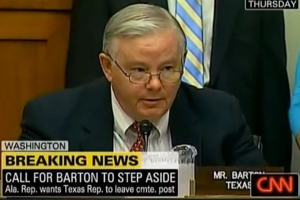 The fallout from Texas Republican Congressman Joe Barton continues, and now some of his Republican colleagues are asking for him to step down from his ranking position on the House Energy and Commerce committee. The Congressman leading the charge, Rep. Jo Bonner of Alabama, represents a district that has been affected significantly by incoming oil on their shores.

Bonner is the second House member to call for Barton to step down after having apologized to BP for having to compensate victims of the oil disaster. Bonner, in a statement released earlier today, announced that Barton had issued another apology– a personal one to him– but that it wasn’t enough:

“Earlier this morning, Rep. Barton called me to offer his personal apologies for any harm that his comments might have caused. It takes a big person to admit they were wrong and I appreciated Joe’s call. However, as I told him, I believe the damage of his comments are beyond repair and, as such, I am today calling on Joe to do the right thing for our conference and immediately step aside as Ranking Member of the Energy and Commerce Committee.”

The reason Barton decided to make his bold statements are still unclear; even if he meant them, the political damage he has received is substantial. Reports, however, are showing that Barton is not alone in his sentiments, and that, as per the CNN report below, “there are some Republicans who actually do believe that, when you look at the substance of it, it was not the smartest thing for the White House to negotiate with BP.”

CNN’s report on Rep. Bonner’s call for Barton to step down below: