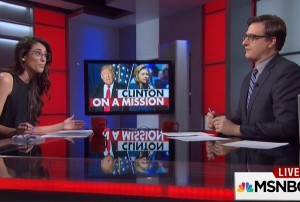 Throughout her career, former Secretary of State and current Democratic frontrunner Hillary Clinton has faced varying levels of sexism and misogyny from opponents and the media, but gender bias can be so pervasive that it even slips into otherwise friendly spaces. For example, on Friday night’s All In with Chris Hayes, the topic was how Hillary Clinton has been kicking the living crap out of Donald Trump this week, which, no matter your political preference, is simply an observable fact. Vox producer/correspondent and avowed  feminist Liz Plank was the guest, and liberal host Chris Hayes the interviewer, and here’s how they chose to discuss Hillary’s domination over Trump:

Plank: I think the choice of words is really interesting. Calling (Trump’s) policy positions “rants.” That he’s thin-skinned. Showing herself as dominant in a way that’s almost, quote-unquote, “masculine,” in having that upper hand compared to him. Something that, again, no other Republican was able to do.

Speaking of interesting word choices, Plank’s use of the qualifier “quote-unquote” seems to be an acknowledgement that she understands the problem with the phrase, yet values the utility of the shorthand enough to deploy it anyway, and Hayes, also a feminist, goes right along with it. Scare-quoted or not, what does it say to our daughters that dominating a male opponent is an inherently masculine activity? And what, exactly, was “almost masculine” about anything Hillary did this week? I’ve watched women stand up to others my entire life, and never has it ever occurred to me think  of it as “masculine.” Even if you accept gender stereotypes, which a guy my age is certainly steeped in, Hillary didn’t engage in any behavior that remotely fits those, other than kicking his ass. Women can kick ass.

This is the flip side of other liberals’ attempt to feminize Trump, as exemplified by Bill Maher‘s declaration that “Lady Trump” is a “whiny little bitch,” projecting inherently inferior traits on Trump by using slurs against women. It’s also part of something that rarely, if ever, gets called out: the use of Trump’s penis size to insult him. It is a window into Trump’s insecurity that he took the extraordinary step of responding to Marco Rubio‘s insult at a nationally televised debate, but Trump opponents who glory in trolling Trump by insisting he really does have a small penis are similarly imparting inherent power to a masculine trait. If Trump is weak because he has a small penis, then what does that say to people who have no penis at all? Conversely, if Donald Trump is hung like John Holmes, does that make him any more qualified to hold the nuclear codes?