Ferguson Activist to CNN: Police Are the Ones Who Need to ‘Keep Calm’ 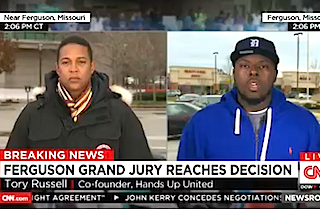 As CNN eagerly awaited a decision from the grand jury in the Michael Brown shooting case Monday afternoon, Don Lemon, on the ground near Ferguson, Missouri, spoke to Tory Russell, co-founder of the Hands Up United organization. Instead of simply urging protesters to remain calm regardless of the grand jury’s decision, as so many have done leading up to this day, Russell urged the police to “keep calm” in their response to the seemingly inevitable protests.

“We’re anxious to actually receive what we want, which is simple justice, man,” Russell told Lemon. “We just want the system of police to be held accountable.” He said without an indictment for Officer Darren Wilson, his group will not feel that justice was served in this case.

Asked by Lemon if he is “urging calm” regardless of the decision, Russell said, “I am urging calm. I’m urging calm for the police officers to not pepper spray me, tear gas me, mace me and shoot rubber bullets.” He added, “People need to urge the police to be calm. Stop hurting kids, stop traumatizing our communities.”

Russell went on to remark that everyone is asking Ferguson protesters to stay “calm” but no one is requesting the same of the police or the FBI or the KKK, who have threatened to use “lethal force” against people in that city. “Why don’t you keep calm and serve the communities?” he asked the police. “I’m paying your bills, you need go ahead and do what I tell you to.”

As he thanked his guest for appearing on CNN, Lemon said, “We are hoping that there is peace on all sides, on all fronts here.”