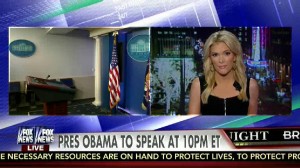 CNN’s non-stop, all-in coverage of the Ferguson story paid off in a major way Monday night when the network saw huge ratings in both the 25-54 demo and total viewers as the grand jury decision was announced and protests ensued throughout the night. Fox News continued its dominance in total viewership.

Overall in primetime, CNN came out nearly a million demo viewers ahead of Fox News, averaging 2.627M compared to the perennial leader’s 1.653M. The peak for CNN came not at 9 p.m. when the decision was announced, but instead during the second half of the 10 p.m. hour when the network reached 3.558M demo viewers.

In total viewers, Fox News averaged 5.563M in primetime compared to 5.079M for CNN. With 7.256M viewers during the 9 p.m. hour, Fox’s The Kelly File was the overall winner for the night. While MSNBC did see a surge of viewers at 9 p.m., topping 2 million total, the network remained far behind both Fox and CNN.