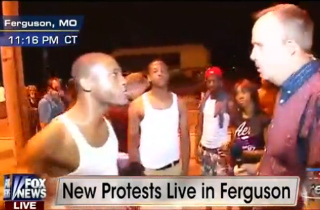 While reporting live from Ferguson, Mo., late Monday night as protests once again turned chaotic, Fox News correspondent Steve Harrigan found himself in an unusual situation: One protestor cursed him out on live television for having described the late-night round of clashes as “child’s play.”

Shortly after police began using tear gas to clear crowds on the streets, Harrigan described to Shepard Smith what he saw as a late-night scene dominated mostly by members of the press:

This is right now a media event, pure and simple. This is people running towards tear gas, running away from it. The dignified protestors went home at dusk. This is just child’s play right now.

That last sentence did not sit well with one protestor nearby who immediately began shouting at Harrigan and the Fox crew.

“Say that shit. I don’t give a damn you’re on TV, say that shit,” the unidentified man cursed at Harrigan. “We see this shit every day. This is just child’s play? Who is the child playing with toys? That’s them.”

“I don’t want to argue with you,” Harrigan told the man.

Fox went back to Smith in studio while Harrigan attempted to calm down the situation. The anchor gave some introspective thoughts on how an incompetent police force (“Keystone Cops,” he said) and the media have seemingly fanned the flames of discontent.

Eventually Fox went back to Harrigan for a one-on-one discussion with another protestor from the earlier scene. “My source of anger is seeing my people — black or white, blue or brown — hurt. And that is why I ask those certain questions to them: Why are they standing there? Or they can go home.”

Asked what he is personally ready to do to fix the situation, the man responded: “What I’m going to do is stand here with my people every night and all night. No pillow, no covers with my twin or my brothers.”