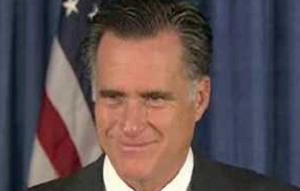 Just hours after CNN sort of called Mitt Romney out for lying about the violence in Libya that has claimed the lives of U.S. .Ambassador Chris Stevens and four other Americans, the Republican presidential candidate held a press conference in which he doubled down on those lies. While the news media have focused on the politically perilous consequences of Romney’s decision to politicize this tragedy, little or no mention is made of the fact that his press conference was not only ghoulishly political, but chock full of lies and contradictions.

Romney has faced a blizzard of criticism for launching political attacks on  the President even as Americans were still being killed in Libya, but almost all of it has centered around the political wisdom of such attacks. At a press conference Wednesday morning, Romney continued the attacks and the lies, but the media, even the reporters in attendance, ignored the lies in favor of the politics.

During his remarks, Romney said that he believed “the administration was wrong to stand by a statement sympathizing with those who had breached our embassy in Ëgypt instead of condemning their actions,” even as he said, in the next breath, that “the White House distanced itself last night from the statement, saying it wasn’t cleared by Washington.”

Romney later broadened his accusation to include “the President and his administration,” accusing them of having “done something which is inconsistent with the principles of America, and that “having that embassy reiterate a statement effectively apologizing for the right of free speech is not the right course for an administration.

The meat of Romney’s attacks on President Obama rely on the spurious notion that any official at the U.S. Embassy in Cairo is somehow the same thing as “the Obama administration,” a claim which, on its own, falls just short to asking President Obama to own every statement ever made by anyone who has worked with Kevin Bacon. Saying “the administration” over and over again doesn’t make it so. For example, if I, as a reporter, ever attributed the guy who runs the embassy Twitter feed as “an Obama administration official,” I would be fired, yet this room  full of reporters was apparently too exhausted to challenge Romney on it.

But even granting that ludicrous premise, which the news media seem to be doing, Romney is still a liar.”The “President and his administration” didn’t do anything, the embassy in Cairo did, and as Romney himself said during the press conference, he and the White House agree completely about the embassy statement. “We join together in the condemnation of the attacks on American embassies, and the loss of American life, and join in the sympathy for these people,” Romney said, “but it’s also important for me, just as it was for the White House last night, by the way, to say that the statements were inappropriate, and in my view a disgraceful statement on the part of our administration to apologize for American values.”

The U.S. embassy in Cairo released this statement before the protests even began:

The Embassy of the United States in Cairo condemns the continuing efforts by misguided individuals to hurt the religious feelings of Muslims – as we condemn efforts to offend believers of all religions. Today, the 11th anniversary of the September 11, 2001 terrorist attacks on the United States, Americans are honoring our patriots and those who serve our nation as the fitting response to the enemies of democracy. Respect for religious beliefs is a cornerstone of American democracy. We firmly reject the actions by those who abuse the universal right of free speech to hurt the religious beliefs of others

Once the protests began, and the compound was breached, the embassy tweeted “This morning’s condemnation”… still stands. As does our condemnation of unjustified breach of the embassy.”

The embassy stood by its statement and condemned the attack. When an American consular employee was shot and killed during the protests, those tweets were deleted.

Are we so mired in post-truth politics now that it not only matters more that Mitt Romney made a terrible political move than that he’s a liar, but that his lying doesn’t matter at all? This says far less about Mitt Romney, who’s just doing what he does, than it does about our news media.

In case you missed it, here’s video of Romney’s presser, via CNN: