Fighting For The Users! Neil Cavuto Compares Medicare Debate To The Movie Tron 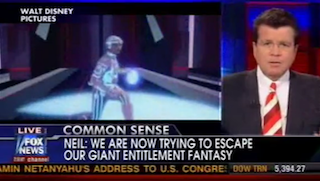 If you know me, you know there’s one surefire way to get me to enjoy a cable news segment no matter what the subject is or who is presenting it. And that surefire way? Make a strained analogy comparing something in the news to a random movie I like. Yes, I don’t care if it’s Chris Matthews explaining the GOP’s tactics with Love Actually or Glenn Beck devoting an entire episode to It’s a Wonderful Life, the sillier it gets, the more they have my attention. We can add another fun one to the bunch today as Neil Cavuto ended his show by comparing the debate over Medicare to the 1982 classic Tron.

And, no, Cavuto isn’t discussing the recent sequel Tron: Legacy. He makes it very clear in a digression that he has no love for that film, calling it “over the top” (Come on, Neil. While I’ll admit the pacing fatally slows down in the final third so Jeff Bridges and Garrett Hedlund can have five-minute-long conversations filled with bad dialogue, unintelligible philosophizing, and Ducati product placement, I don’t know how anyone can’t love the first hour with all its crazy special effects, tense game scenes, amazing Daft Punk score, and Olivia Wilde. Oh, wait. Now I’m the one digressing. Sorry). No, Cavuto’s talking about the original. You’ve all seen it, right?

So how does this relate to Medicare?

“I think this is our Tron moment and, specifically, the ‘final minutes in the movie Tron‘ moment. Let me explain. The light is fading fast and the time to escape is dwindling down. I know, in the final minutes they’re trying to escape a big ol’ computer game fantasy. But is that all that different than us desperately trying to escape the entitlement fantasy? A fantasy where Washington tells us, ‘Medicare is fine. Just play on.’ and everyone’s playing games and no one says stop except the guys who want out. The time is running out.”

Hey, if any other TV hosts want to do a monologue about Porky’s, I’d really appreciate it.