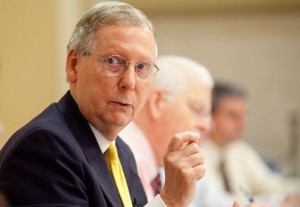 Senate Minority Leader Mitch McConnell (R-KY) may have made United States senate history today when he beat his own legislative baloney, blocking a straight up-or-down vote on a proposal that he, himself, offered for a vote Thursday morning. The bill, which would have taken the debt ceiling gun away from the head of the U.S. economy by requiring a two-thirds majority to override a presidential increase to the debt ceiling, was McConnell’s idea, but when Senate Majority Leader Harry Reid agreed with McConnell’s request for a vote on the bill Thursday afternoon, McConnell objected.

Senate Minority Leader Mitch McConnell (R-KY) wanted to prove on Thursday that Democrats don’t have the votes to weaken Congress’ authority on the debt limit. Instead they called his bluff, and he ended up filibustering his own bill.

The legislation, modeled on a proposal McConnell offered last year as a “last-choice option” to avert a U.S. debt default, would permit the president to unilaterally lift the debt ceiling unless Congress mustered a two-thirds majority to stop him.

McConnell brought up the legislation Thursday morning. Senate Majority Leader Harry Reid (D-NV) initially objected, seemingly proving the Republican leader’s point that it cannot pass the Senate. But then Reid ran it by his members and, in the afternoon, agreed to hold that same vote. This time it was McConnell who objected.

“The Republican leader objects to his own idea,” Reid declared on the floor. “So I guess we have a filibuster of his own bill.”

Assistant Senate Majority Leader Dick Durbin (D-IL) also weighed in on McConnell’s maneuver, innocently noting that “it really calls into question whether or not this was the kind of offer that one would consider to be good faith.”

The Obama-era Republican Senate Minority has made unprecedented filibuster abuse their calling card, but this may be the first instance of filibuster self-abuse. What will historians think?