Finally! Even The ‘Liberal Media’ Recognizes The ‘Nightmare’ That Is Martin Bashir’s MSNBC Show

Finally! Even The ‘Liberal Media’ Recognizes The ‘Nightmare’ That Is Martin Bashir’s MSNBC Show 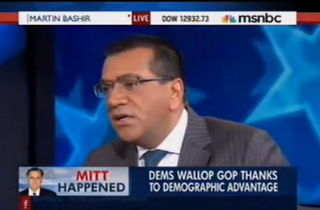 As a libertarian who cares a great deal about civil liberties, two of the many things that irritate me are drone strikes and… MSNBC’s Martin Bashir.

I’ve long been astonished that even the more progressive members of the media have failed to pick up on the intellectual dishonesty and over-the-top vitriol that the MSNBC host displays on a daily basis.

But that astonishment ended yesterday when Esquire‘s political writer Charles Pierce offered up a scathing criticism of a Bashir segment on President Obama’s use of unmanned drones in taking out suspected terrorists overseas.

Pierce dubbed the segment a “moral nightmare” for its neglect of the delicate moral issues involved with such a controversial terror policy. The segment, Pierce wrote, consisted of two guests speaking freely about their support for Obama’s drone policy without any hint of opposition or moral hesitation. The Esquire writer also noted that Bashir and his guests failed to notice the irony in their praising of the program’s decisions about “who should live and who should die” being made “at the very top” — something that progressives rightfully demonized during the Vietnam War.

And when it rains Bashir criticism, it apparently pours. Another liberal journalist, The Guardian‘s Glenn Greenwald, came at Bashir, calling the show “one of the worst atrocities on TV“:

Greenwald has long been a critic of the MSNBC commentators who he believes merrily tow the Democratic Party’s line on most issues — Bashir is no exception. A policy like the secretive “kill list” and the drone-bombing of suspected terrorists (and people surrounding them) is a policy that would deservedly receive much scorn from Bashir had it been under a Republican president; but such ridicule is seemingly absent because we have a Democratic president.

Greenwald correctly takes it a step further saying Bashir is perhaps the worst program on MSNBC. But the reasons go beyond just the aforementioned intellectual dishonesty.

The New York Times‘ Jeremy Peters got it exactly right when he cited Bashir as an example of the network’s “extravagant partisans” who “recycle talking points” and “insult and mock” the Republican opposition.

Take, for instance, the time he played a sound-bite from conservative columnist Charles Krauthammer analyzing Romney’s electoral defeat. Once he came back to camera, Bashir joked: “Now I need to apologize to any young viewers who may have been frightened by that face.”

Not only does this insult go beyond ideology or politics, its just mean-spirited. Krauthammer, mind you, is a paraplegic — the result of a diving accident many years ago. This “joke” was tantamount to grade schooler Bashir on the playground bullying a disabled kid for his “stupid doody face.”

Nevertheless, Bashir’s guests Ana Marie Cox and Jonathan Capehart giggled along and continued on with a predictable stream of Republican-bashing bullet points. All while Bashir’s insults and lack of self-awareness seem to be encouraged.

His guests’ non-reactions, in addition to the show’s lack of liberal introspectiveness, highlight how Bashir’s show is the sort of “liberal bubble” that should infuriate dedicated progressives. On a near-daily basis, Bashir surrounds himself with the usual slew of “Democratic consultants” and liberal “MSNBC contributors.” That’s all well and good, except the show’s themes and messages are predictable, all while being completely oblivious to its own redundancy. Bashir mocks and poo-poos Republicans with glee — not a single Romney breath was spared ridicule — and asks the sort of self-congratulatory questions that can only prompt his guests to agree and join in on the relentless bashing of their opposition. Very rarely do the guests look inward and take the position that perhaps a Democrat in power is in the wrong (see, for instance, the above drone warfare segment cited by Pierce).

It’s no wonder you don’t often spot an opposing guest on the program. When one does appear, it is usually one of the network’s Republican contributors whose job is to make such appearances. But true policy debates on Bashir’s show are about as rare as a Sasquatch sighting. And when they occur, like in Bashir’s debate with a Koch Industries spokesman, Bashir runs through a gaggle of absurdly leading questions, all under the laugh-worthy premise of “just wanting to be accurate.” (That’s not to say the Koch lawyer wasn’t incoherent and seemingly incapable of defending his company. Because he was.)

In another debate segment, Bashir effectively bullied and cut off a Republican guest who dared suggest that a direct subordinate of Obama has an interest in defending the president from political attack, regardless of whether he personally agrees with the attacks. Bashir shouted at the man for casting a “contemptuous aspersion” against a military officer. Of course, if it were a military officer under a Republican administration, Bashir’s tune would undoubtedly have been quite different.

And then when hard-news guests like NBC News reporter Luke Russert don’t comply with Bashir’s unending need for White House talking points, he takes on a frustrated tone and attempts to coerce the reporter into agreeing with a partisan point.

The half-hour point of the program each day is marked by a smash-cut of conservatives seemingly making fools of themselves with goofy soundbites. It is really not hard to mock Republicans these days — they offer some pretty low-hanging fruit — but people like Jon Stewart and Stephen Colbert do it with aplomb and humor. Bashir’s mockery isn’t fun or funny but rather sort of bizarre, angry and often just personal.